Gov't Mule: Bring On The Music - Live at the Capitol Theatre 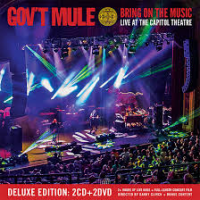 In the essay within the 2CD/2DVD package of Gov't Mule's Bring On The Music, Warren Haynes makes note of the the group's twenty-fifth anniversary. And while the co-founder and titular leader of an ensemble originally spun off from The Allman Brothers Band goes to great length in rightfully stipulating the band's music as the source of its longevity, he doesn't formally assign Live at the Capitol Theatre, the formal designation as recognition of the quarter-century milestone. Thus, only a tacit acknowledgment of this touchpoint resides within this set (within which are two totally different collections of tracks the audio from which video is available on a separate double compact disc package released prior to this title).

Nevertheless, Bring On The Music compares favorably to the string of comparably expansive packages released five years ago at the two-decade mark. Dark Side of the Mule (Evil Teen, 2014) and Dub Side of the Mule (Provogue, 2014) also comprised audio and video documentation of significant events in the band's history. Yet, even with the title's availability in a variety of configurations with differing tracks lists—simultaneously maximizing the widest inclusion of music as well as completist ownership and maximum merchandising opportunities—none purports to present an accurate, not to mention comprehensive, cross-section of the band's history.

That said, the content recorded over two nights in April of 2018 at the Port Chester, New York venue does offer an accurate depiction of the set lists in recent years. Without the inclusion of complete sets, though, the performances and the selection of material posits a somewhat contrived and narrow perspective on how far Gov't Mule's come in a quarter century, further begging the question of the rationale behind the choices. Nevertheless, Haynes and company deserve more than a little credit for not relying on past glories, and accordingly, the earliest vintage selections, in the form of "Thorazine Shuffle," and "Blind Man in the Dark " are balanced with a clutch of numbers from the prior year's studio effort Revolution Come, Revolution Go (Fantasy, 2017), including its titletune, "Stone Cold Rage" and "Pressure Under fire."

Recorded by Heath Robson, mixed by Gordie Johnson and mastered by Greg Calbi, the uniformity and clarity of the sound quality is, not surprisingly, as seamless as the musicianship. And whatever reservations might arise regarding selections of material, the Mule sound undeniably powerful, whether proffering tunes originally recorded with the trio, including the late Allen Woody, as well as those rendered with the current quartet featuring Jorgen Carlsson on bass, along with charter member drummer Matt Abts and multi-instrumentalist Danny Louis. In comparison to the somewhat static readings that proliferate on the aforementioned audio set (and its corollary vinyl LP's), "Endless Parade" and "Little Toy Brain" heighten the impact of these concert pieces, on their own terms and in the context of whole collection, thereby mitigating the air of ennui that permeates the other title.

Still, it's puzzling to note, on film anyway, the relative paucity of much from the band's most prolific and (arguably) inspired period: Deja Voodoo (ATO Records, 2004) and its followup High & Mighty (ATO Records, 2006). Only a cynic would contend the stage production represents a deliberate means to compensate for any perceived falloff in creative setlist composition or instrumental improvisation, here represented with a long-ago established segue in the form of "Trane," "Eternity's Breath " and "St. Stephen Jam." Still, there's no doubt the visual backdrop of the Gov't Mule symbology of the band and the over-sized cover imagery of its recent release elevates the visual aspect of the Danny Clinch film, especially for a band not exactly photogenic on its own terms or particularly demonstrative as it plays.

Accordingly, with such a colorful backdrop for his film work, the noted photographer makes a fluid transition from one craft to another. His camera angles, panoramic shots and transitions generate a kinetic sensation, almost like a series of time-elapsed, iconic portraits of the quartet in action. Such varied perspectives mirror the musicianship too, as the Mule infuses "Thorns of Life" with fevered intensity and makes the placement of "No Need to Suffer," with its shadowy mood and marked looser instrumental interplay, a stark contrast to more straightforward renderings of newer material (and, in fact, much of the 'soundtrack' to the video in this package).

Certainly the the bonus add-ons of videos and an anthology of Clinch's photos of Gov't Mule over the years increases the value of Bring On The Music—Live at the Capitol Theatre. And even if these thirty-nine tracks don't exactly present a cross-section of the band's entire discography, the eclectic mix of material represents the unpredictable dynamism of the group in concert, to the extent it may well function as a point of demarcation for the band to move forward into its next decade(s).