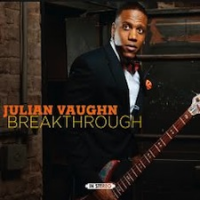 Within the first 30 seconds of the stomping "On Your Feet," the lead-off track on Breakthrough, it's hard not to think, "Darned if this guy doesn't sound just like Wayman Tisdale." Hopefully Julian Vaughn will take the comparison as a compliment because his "lead bass" playing style is eerily reminiscent of Tisdale, who passed away in 2009.

The publicity notes for Vaughn's third album say he "doesn't try to be any other bassist than who he is." That's nice to say but as one of the producers is Darren Rahn, who collaborated with Tisdale, it isn't a stretch to suggest that Vaughn, a Kansas City native, wasn't ever so slightly influenced by Tisdale. Additionally, at a towering 6' 7" Vaughn is only an inch shorter than the former NBA power forward.

Breakthrough is calculated to make a splash on the charts and airwaves, not break any new ground. There is a cover of the R&B hit, "Rock Steady," a few vocal tracks that are okay, nothing memorable though, and a lot party tunes that given Vaughn plenty of space to jam and riff for the sake of jamming and riffing. Most of it sounds pretty good even if it's not terribly memorable.

The breakthrough here is Vaughn's confidence as a player and how much he dominates the proceedings as the star of the show. The ranks of premier electric bassists in his field has thinned, since Stanley Clarke says he's retired from the genre, Marcus Miller has one foot in the funk jazz genre, but is hardly wedded to it and Victor Wooten follows a uniquely eclectic muse which leaves the field wide open for Vaughn.

"Potential" is the heaviest word in the world because it means you haven't done it yet. Vaughn is playing it cautiously and conservatively as he's trying to leave a positive impression with the audience he's aiming for and the current position of Breakthrough on the contemporary jazz charts indicates it was a savvy strategy.

Vaughn has demonstrated he has talent. Now he has to take on the next challenge of making himself stand out from the crowd by stepping off the path established by others and blaze his own trail.

On Your Feet; J's Jammin; Ju Ju's Groove; The Thought of You; Breakthrough; I'll Do It; Be My Girl; Rock Steady; No Matter; Right On Time; Always Be Together.