By JAKOB BAEKGAARD
January 29, 2009
Sign in to view read count 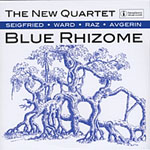 While it is etymologically implied that the avant-garde looks ahead, being the vanguard of musical development, composer and guitarist Karl E.H. Seigfried and his New Quartet emphasize the many traditions that melt together in the creation of new music. Siegfried's idea of the avant-garde is not that of a radically new beginning, but rather a refined net of traditions with the blues being the primary influence on his musical language. Thus, he chose to name the album Blue Rhizome, thereby underlining the intertwined nature of the music while still paying homage to the blues.

Blue Rhizome is a single composition divided into nine movements, each with its own title, and they reflect Siegfried's refined musical language where jazz, folklore, metal, rock and blues meet to create a singular world of sound.

"Destroy All Monsters," on the other hand, is an infernal heavy metal hymn showcasing the tight interplay between Siegfried and drummer Chris Avgerin. Part of the idea of this music is to embody different stages of knowledge and emotion, and "Destroy All Monsters," with its aggressive guitar work and hard rhythms, represents the anger that can grow out of apathy.

As a work, Blue Rhizome addresses major existential issues such as death ("We Will All Become Ash") and love ("Sometimes, There Is Love"). The music shifts between full-blown ensemble playing and naked soliloquies, thus reflecting the shifting conditions of human life: from life in social tribes to sole reflections on mortality.

Blue Rhizome is an ambitious effort, but its greatest success is in bringing its many threads together—thematically, as well as musically. What it all boils down to is the ancient cry of the human soul that is also heard in the blues: a cry for freedom that can't be bound. It's a freedom that is mimicked in the work of Blue Rhizome—that of breaking all musical chains while still being rooted in tradition.

Overture; Interlude I: The Blue & the Black; Fortress of Solitude; Interlude II; We Will All Become Ash; Gopalnath; Destroy All Monsters; A Distant Beauty; Interlude III: Sometimes, There Is Love; Underture.