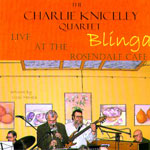 Fusion fans will probably disagree, but in most jazz settings, the electric bass fits about as well as a pickle in a jar of peanut butter. The rich timbre of the acoustic upright is hard to beat and frequently its electrified cousin is the weapon of choice for poppin' and snappin' technicians who revel in showing off their mastery of the Barney Miller theme or, worse, those annoying little segues after the commercials on Seinfeld. But in the hands of Charlie Kniceley, who's played with everyone from Jack DeJohnette to Connie Francis, the instrument somehow becomes a vehicle of taste, its player bringing out the subtle tones that most of his histrionic peers overlook. Kniceley worries more about playing for the big picture and less about trying to be the next Jaco Pastorius, thank you very much.

Although the Charlie Kniceley Quartet was a regular presence on the upstate New York scene in the late 1970s, the group never got around to releasing any recordings at the time. But luckily for lovers of fine post bop sounds, Kniceley recently reformed the band after a 25-year hiatus to correct that situation, resulting in this sharp 65-minute set.

Captured live at the Rosendale Café in Rosendale, New York, the quartet is rounded out by saxophonist Ed Xiques, drummer Steve Haas, and pianist Mike Kull. Its roiling, twinkling sound summons the spirit of the Coltrane Quartet; on the lead track, "Why, Xiques' soprano takes a motif lifted from "My Funny Valentine and twists it through a web of Trane-inspired Middle-Eastern modes. Adding to the Coltrane comparisons is Kull, whose icy, crystalline technique recalls that of McCoy Tyner as well as one of Tyner's own muses, Teddy Wilson.

Kniceley and Xiques split the songwriting duties for "Blinga nearly down the middle: Kinceley, four; Xiques, three. Yet ironically it's Xiques' "Spacewalk that serves as the scenario for Kniceley's most memorable solo, an inspired passage that sees him negotiating the neck of his instrument with flawless fluidity and enough tunefulness to sustain the attention of even the least jazz-friendly listener.

But the most arresting moments come during the disc's extended title piece. In a mere 10:40, the quartet brings the Sahara to Rosendale as Xique's Arabian spell hovers high above Kniceley and Kull's tandem sinister, walking lines.

After such a lengthy sabbatical, fans of the Charlie Kniceley Quartet will certainly find this record to have been worth the wait. Hopefully they won't have to wait so long for the next one.

Visit Charlie Kniceley on the web.