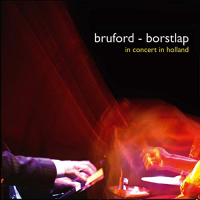 2005 seems to be the year of Bill Bruford. The drummer who first made his name with groups like Yes and King Crimson, but has more recently been heard in a looser improvisational context that might be considered jazz but also demonstrates elements of things farther afield, has a number of releases on the go. On his fledgling Winterfold and Summerfold labels fans will get the opportunity, over the next few months, to pick up remastered and expanded versions of his complete back catalogue, dating back to his first solo album, '77's Feels Good to Me with Allan Holdsworth, Jeff Berlin and Dave Stewart (amongst others), and continuing straight through to his late '80s Earthworks releases with keyboardist Django Bates and saxophonist Iain Ballamy. He's already released a CD of new music as part of his ongoing duet with Dutch keyboardist Michiel Borstlap—Every Step a Dance, Every Word a Song—and rumor has it that a live recording of his expanded Earthworks Underground Orchestra, featuring woodwind multi- instrumentalist Tim Garland, will be released before the year's end.

But the subject at hand is In Concert In Holland, a live DVD culled from two '02 duet performances with Borstlap. Generally less abstract and more direct than Every Step a Dance, perhaps because this was early days for Bruford and Borstlap as a duo, it provides the opportunity to watch the music unfold as opposed to merely hearing it.

One of the most revealing aspects is Bruford's use of a rather unconventional drum setup. While not new to those fortunate enough to have seen him live in recent years or on the concert DVD Footloose Live in NYC, it is something of a revelation to those not already in the know, illustrating how he's able to approach the kit from a clearly unique perspective. Rather than having his kit go from snare to floor toms, left to right, his arrangement is more like a tympani setup, with the snare in the centre, and toms and cymbals fanning out on both sides. In addition, the drums are all at the same level, again fashioned after a tympani set-up, allowing for more fluid movement around the kit.

Logistics aside, the DVD consists of two performances. The first, recorded by the Dutch NPS Radio and NPS New Media, is an hour-long performance that is more overtly rhythm-based than the collective set on Every Step a Dance. Whereas Bruford gets into more pure color and texture on Every Step a Dance, on this concert, recorded in Nijmegen, he demonstrates the kind of staggering polyrhythmic ability to divide and subdivide time that made him such an essential voice on the progressive rock scene in his early days.

That's not to say, however, that as essentially rhythm-centric as this performance is, that that there aren't large dollops of spirited liberation. In fact, while it becomes clear that there are certain preconceived conceptual motifs in play here, much of the music is about a meeting of two musical minds, making it often difficult to determine where the form ends and the improvisation begins—or vice versa. On Borstlap's "Mister B.B.," Bruford is clearly reading off a chart; still, the form is so abstruse, and the interplay between the two so developed, even at this early stage, that it becomes easy to quickly loses sight of the fact that some of the music is of a more structured complexion.

And while, with six of the eight performances at Nijmegen being attributed to Borstlap—the other two are collaborative compositions or, most likely, purely free constructs—there is some kind of form to which the duo adheres, the context is still looser, more performance-based as Bruford would put it; more immediate and more inherently responsive. Borstlap, an artist whose reach extends from an intimate knowledge of jazz history to styles beyond, concentrates primarily on piano, although he does make good use of synthesizers for color, creating deep washes on tunes like "Prologue." And he makes intriguing use of a looping device on his piano on "Conception," carefully building a backdrop over which he layers his improvisations.

And both artists' ears are wide open from start to finish. That each can pick up on inflections sometimes subtle, other times more direct, explains why this pairing has continued on from their earliest meetings in '02 through '04 and, hopefully, beyond.

Recorded with a number of cameras and featuring a nice crisp mix, the Nijmegen performance provides a front-row seat to an early performance showing that, while the duo will clearly evolve by the time it records its performances in '03 and '04 for Every Step a Dance, there's a certain thrill of discovery here that cannot be underestimated. And, as a bonus, this limited edition release also includes an audio CD of the Nijmegen performance.

Supplementing the Nijmegen show is an additional 35 minutes of footage from a performance in Maastricht. Bruford's backstage banter is wryly amusing, and provides a lighthearted introduction to the actual concert footage. But the real meat is the roughly 30-minute performance that includes the only carry-over to their '03 and '04 performances that would be used for Every Step a Dance: an unusually abstract reading of Thelonious Monk's "'Round Midnight." Recorded with a single camera and with sound coming from the house rather than a board mix, this is decidedly low-tech compared to the Nijmegen performance. Still, it provides further insight into the inner workings of the duo, with plenty of excitement all around and, surprisingly, even a fairly straightforward blues on "Sintar Klaas is Boos."

Keyboard and drum duos clearly have more limited appeal, but if it's possible to get past the stigma attached to a format that is less than traditional, then there is an opportunity to experience a collective that, while almost as exposed as a solo performance, delivers a considerably broader sonic palette. Between Borstlap's keyboards and Bruford's drums all the bases really are covered, with a sound that is complete and lacking in nothing.

In Concert In Holland is the kind of performance that shows, like Every Step a Dance, just how far Bruford has come as an improvising musician. Lively and filled with the kind of intuition that is remarkable for a duo at such an early stage in its development, the DVD is essential viewing for anyone interested in watching two artists in an environment of pure risk without a safety net.