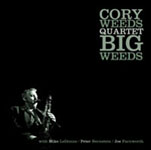 Big Weeds could well herald the return of the big, bad saxophone. Its protagonist, Cory Weeds, blazes his masterful way through a monstrous set, alternating on tenor and alto. And in one fell swoop, Weeds joins the ranks of the instrument's great storytellers. On tenor he is as bold and dramatic as Dexter Gordon and Sonny Rollins. On the smaller and more sensuous alto, he is a younger version of (when he is racy) David "Fathead" Newman or, at times, as wry and ironic as Lee Konitz—even puckish like Paul Desmond. And so, in acquitting himself with aplomb on tenor and alto, Weeds gives notice that he has a soulful understanding of both horns—no mean achievement, by any saxophonist's standards.

Now here is another thing: Not only does Weeds play two horns so subtly different from each other—unlike, say, tenor and soprano—but he can make each horn bend to his will. So if he is playing a ballad, as he does so memorably on this record, or if he is roaring through a racy straight-ahead bop-ish tune, he simply 'becomes' the horn he is playing. His innate ability to inhabit the soul of a song is near perfect and this leads him to an exquisite sense of phrasing and pace. For instance Ol' Blue Eyes, Frank Sinatra, can almost be heard as Weeds 'sings' his way through "Blossoms in May," a tender chart dedicated to his wife. On "For Fathead," a more obvious tribute to Newman, he is shy and respectful as he dances around his homage; it's almost possible to see the saxophonist approach an idol with great diffidence.

That Weeds wrote both the above charts is a testament to his prowess as a songwriter as well. It is not, after all, about form, but more so about subtlety and nuance. And here Weeds is in great company as well. The mighty Mike LeDonne joins Weeds on Hammond B3, Peter Bernstein is added on guitar and Joe Farnsworth holds down the drum chair. Together this is a band that locks tight on James Moody's relatively little-known classic, "Darben the Redd Foxx." And their interpretation of "It's Only a Paper Moon" is wonderfully exhilarating. LeDonne, better known for his piano work for Benny Golson, is often spare yet wholesome on B3—especially on "Corrupted Mango," that oblique reference to the chord changes on Sonny Rollins' "St Thomas," while on "Simply Said," he opens up the organ in heartfelt wails and moans like no other B3 organist does—not even the great Joey DeFrancesco. Farnsworth plays with wonderful taste and lyricism throughout.

It is hard to believe that this is Cory Weeds' first record as a leader. This is real old school 'saxophonism' at its very best by a saxophonist about whom much will be heard in the years to come. And it features music that will echo in a room long after the notes of the last bar fades.

Darben The Redd Foxx; Corrupted Mango; For Fathead; Blossoms In May; It's Only A Paper Moon; Simply Said; No Bull; Modal Issue.