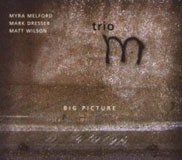 Superficially, the combination of pianist Myra Melford, bassist Mark Dresser and drummer Matt Wilson might seem unusual, though the three have previously commingled. Melford and Dresser are known for their work in freer contexts or exploring extended compositional forms, while Wilson—by no means a neo-traditionalist—has forged a reputation playing more established forms and grooves. After years of musing about a trio, the three convened for a gig and were so pleased with the results that they played more, ultimately heading to a studio to record Big Picture.

Each musician contributes compositions but, with the exception of the ambitious, suite-like title track penned by Melford, the pieces were written for other groups, rearranged and reinterpreted here. Stripped of the brass and reeds of the original version, the pianist's "brainFire and bugLight is spacious, with Wilson, then Dresser, embellishing the spare piano introduction. The intensity builds as they playfully tease the theme, move into open passages and coalesce again. A rolling tom-tom rhythm burbles beneath Dresser's "For Bradford," a piece written for his drummer-less trio, showing the malleability of the composition and Wilson's inventiveness. The drummer's "Naïve Art boasts a staggering, bluesy feel that Melford peppers with roadhouse swagger and with Dresser's arco spiraling, an accelerating ensemble figure hurtles toward the conclusion.

With a nod to its enduring fertility, Trio M joyfully confounds expectations with the litheness afforded by the piano trio format.