Home » Jazz Articles » I Heart Lung: Between Them a Forest Grew, Trackless and Quiet

I Heart Lung: Between Them a Forest Grew, Trackless and Quiet

By Ian Patterson
October 4, 2007
Sign in to view read count 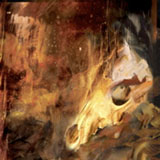 Between Them a Forest Grew, Trackless and Quiet is a title which might not seem out of place in a collection of metaphysical poetry, although whilst such poetry appeals largely to the intellect, the music of I Heart Lung appeals to the emotions.

Nevertheless, the metaphysical poets and guitarist Chris Schlarb and drummer Tom Steck do share some common ground; the former challenged the conventional imagery of the 17th century lyric and experimented with rhythm whilst the latter duo are in their own way questioning modern conventions, albeit of a musical kind, and in the process they are creating music as beautiful as it is challenging.

"Maleem Ya Maleem pitches up-tempo through light-of-touch drum patterns against ghostly, feather-light guitar lines; if guitarist Bill Frisell had replaced Jerry Garcia in the Grateful Dead then their more exploratory music might have sounded something like this.

The contrast between hypnotic, driving percussion and susurrus, meditative guitar is a feature of the music. Similarly, sustained drone-like sounds, whether they are of the six-stringed or electronic variety, color much of the music. When all these elements come together as on "If I Were a Young Man Now and, most notably, on "Moving Through Color 1, the music is quite epic in nature.

The intervention on a couple of tracks by Peter Chan on clarinet and alto saxophone adds some colorful improvisation. On "Lycanthrapy, guitar and saxophone engage in chatter which is at times playful, argumentative and then manic, like Punch and Judy on a bender. It is, however, overwhelmingly the union of Schlarb and Steck which defines the spirit of the music. Their ability to communicate so much with such a minimalist approach to music making is enviable.

Meditative yet driving, understated and epic at the same time, this is music which courses through the veins as soothingly as an opiate and as sharply as electricity.

In tribute to one of metaphysical poetry's greatest exponents, singer Van Morrison sang: "Rave on, John Donne... —ditto Chris Schlarb and Tom Steck. Rave on down through time and space, rave on, rave on, rave on.

Title: Between Them a Forest Grew, Trackless and Quiet | Year Released: 2007 | Record Label: Sounds Are Active

About I Heart Lung

I Heart Lung CD/LP/Track Review Ian Patterson Sounds Are Active United States Between Them a Forest Grew, Trackless and Quiet