Bennett and Gaga at Kennedy Center: Dissection of an Era 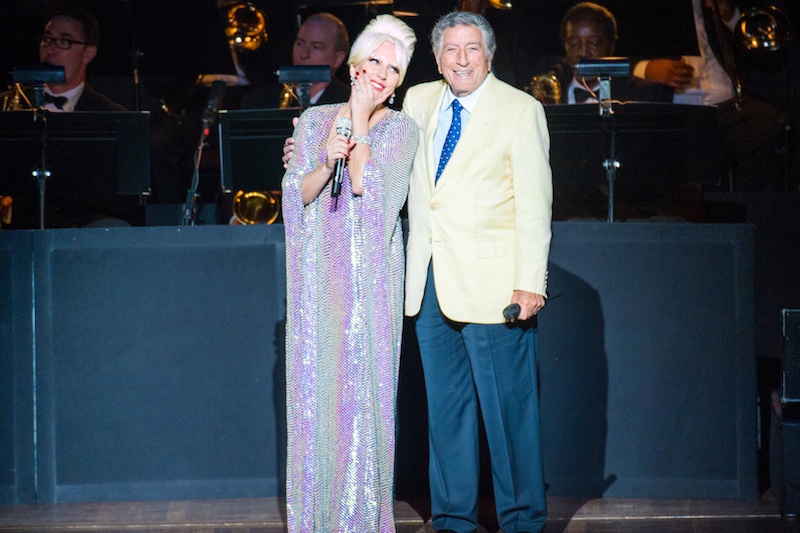 By FRANZ A. MATZNER
August 14, 2015
Sign in to view read count
Tony Bennett and Lady Gaga's duet project has captured headlines from its inception and for the most part the carefully constructed and deliberatively delivered juxtaposition of styles, age, and temperament has been showered with praise, including receiving a Grammy award. Not surprisingly, then, their final performance together held in the Kennedy Center's expansive concert hall was met with great expectations. Judging by audience reaction alone, the ensuing spectacle of thirty-plus songs, deft stagecraft, extravagant costumes, and ingenuously delivered sentiment struck home. The performance received a series of standing ovations from start to finish. And why not? At 88, Tony Bennett deserves commendation for his venerable career, in addition to the ability he demonstrated to deliver poignant, re-contextualized versions of his classic tunes. Lady Gaga's audacity and talent have made her one of the most popular idols of her time, one whose hallmark social consciousness seems to add Warholian weight to her every gesture.

The simple act of their musical coming together makes for irrefutably fertile media ground. The contrast in ages challenges our cultural preconceptions. The musical selections and arrangements suggest a lost continuity between the great American songbook and today's pop music. The alternation between solo tunes and duets casts a spotlight on each performer, simultaneously re-affirming Gaga as a vocal force and recognizing Bennett's historic role as heir to Frank Sinatra. The big band, the titillating costumes, and the spectacle combine to penetrate deep into the nerve center of American nostalgia for the era of the Greatest Generation.

The narrative, therefore, was of a successful experiment elevating both artists and drawing new audiences to the music of the 40's and 50's, the period that heralded the pop phenomena itself.

The evening's high points certainly supported such a narrative. On duet tunes like the opening "Anything Goes," the playfully rendered "I Won't Dance," and requisite "Lady is a Tramp," Bennett and Gaga showed an ability to tap directly into the mainstay of pop sensibility, navigating these classics with aplomb and a refreshing sense of good humor that underscored the music's ability to uplift and embrace joyfulness.

Bennett also put forward poignantly reworked versions of his repertoire that unearthed the oft-obscured subtler shades of meaning latent in the music of that time. For example, Bennett allowed the age-induced rawness and strain of his voice to extract rich layers of meaning from Duke Ellington's "Solitude," which resonated more than ever as a haunting meditation on the loss of a life partner in the twilight years. In his hands, the potentially quaint "When You're Smiling" became a touching reminder to emphasize the positive in a lifetime of human experience. Similarly, Bennett bravely approached "Fly Me to the Moon" with only a guitar accompaniment. Filling the concert hall without amplification, Bennett mined this standard to great effect, converting the torch song into an appeal to the audience to embrace timeless love and romantic faith through the sheer earnestness of his straining voice. For her part, Lady Gaga's parade of painstakingly provocative outfits may have failed to get a rise out of D.C.'s notoriously staid audience, but when stripped to the bare essentials of her voice and backed by her adept quartet, she faired much better, especially when she let slip her staged brusqueness to expose more genuine sentiment, as she did on tune's like "Everyday We Say Goodbye" (dedicated to the attending Valerie Jarrett), and an elegant rendition of "La Vie en Rose." Gaga also produced rousing, tongue-in-cheek renditions of era stalwarts like "Bang Bang" and partnered with Bennett for an intriguing take on "Nature Boy."

At the other end of the spectrum, however, the night's low points unintentionally exposed the darker elements of that particular musical era. Failed attempts like an utterly over-staged "Cheek to Cheek" and a saccharine "Who Cares" resurrected the cookie cutter schmaltz of the era, which at best was tasteless and at worst promulgated the restrictive, highly gendered definition of "happiness" that the following generation would rebel against. Worse yet, however, was the evening's nadir—Gaga's rendition of the jazz standard "Is You Is or Is You Ain't My Baby?." Decked out in a period fedora and suit, Gaga strutted the stage while delivering tortured vocals that at times seemed a parody of black vocal style and slipped over the edge into offense, reminding one of the long history of appropriation and African-American repression that cannot be separated from the music of that time and deserves to be more judiciously approached, if not directly confronted.

At the end of the night, these competing highs and lows revealed something more complex than appeared to have been intended. The event's best moments conjured the pleasure of a straightforward tune and simple sentiment, while providing a window into a period steeped in a sense of hope, progress and possibility. On the other hand, the evening's less inspired moments reinforced that the era's sense of hope and progress was largely restricted to a privileged class, and that the portrait of happiness being painted was tainted by stark racial division, a consistent pattern of cultural appropriation, and flagrant sexism.

The 40s and 50s comprised a complex era, simultaneously rich with fresh hope and festering inequity. A bolder approach might have explored these tensions intentionally, but the final result was nonetheless illuminating.