The Monks of Norcia: Benedicta: Marian Chant from Norcia 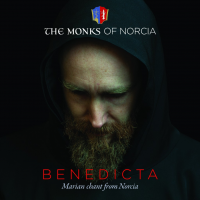 The mid-1990s so-called "new age" or "ambient" music discovered the Plainsong, leading to the release of Chant (Angel, 1973/1994) by the Benedictine Monks of Santo Domingo de Silos. Such a spike in popularity in all things mystical was nothing novel at the end of the Twentieth Century (or any other post-civilization century, for that matter). Judging from the fact that recordings twenty years old at the time, by a non- descript group of cloistered clerics reflects that only the shallow thought of profit motivated the Chant phenomenon (and the inevitable subsequent releases by the same Abby, Chant II (Universal, 1995), Ave Maria (Universal, 1995), Chant III (Universal, 1996), and Christmas Chants (Universial, 1996). To be sure, these recordings are exceptional, but their release remains, nevertheless, the record label's bottom line.

The public greeted this music, much between 500 and 1500 years old, as if discovering a forgotten toy. Post-modernity meets the Middle Ages. The programming of these releases was somewhat haphazard. The music was presented with a limited and ill-defined perspective as to what Plainchant actually is. Chant is foremost church music used in the liturgies (ritualistic worship) of the Western Church (typically defines as Roman Catholicism was well as the original Protestant churches). Specifically, Plainsong Plainsong is typically a cappella, vocally expressed monophonic music, made up of a single, unaccompanied melodic line. Its rhythm is generally freer than the metric rhythm of later Western music. The text of chant come largely from the Book of Psalms found in the Jewish Torah and Christian Bible.

There are two forms of chant: responsorial and antiphonal. In responsorial singing, a soloist (or choir) sings a series of verses, each one followed by a response from the choir (or congregation). In antiphonal singing, the verses are sung alternately by a soloist and choir, or by choir and congregation. A noted feature in plainsong is the use of the same melody for various texts. This is typical for the ordinary psalmody in which the same formula, the "psalm tone." This would be readily identifiable to any Catholic having gone to Mass anytime.

Two other elements helpful in understanding plainsong are the significance of Pope Gregory and the Divine Office of worship. Pope Gregory I (c. 540—604) is credited with developing plainsong in religious worship, noted as the well-known Gregorian Chant. The Divine Office or Liturgy of the Hours is the official series of prayers "marking the hours of each day and sanctifying the day with prayer" according to the United States Conference of Catholic Bishops. "Liturgy of the Hours." The Divine Office consists primarily of psalms supplemented by hymns, readings and other prayers recited daily by cloistered clerics. Together with the Mass, it constitutes the official public prayer life of the Church. Of importance here is the Divine Office also comprises the basis of prayer within Christian monasticism.

That is all a big meal of background to digest, but it is a necessary one to fully appreciate this music. This is music of contemplation and worship. It is necessarily simple, serene and quiet. These characteristics are ensure by the monophonic nature of the pieces. So, what is so special about The Monks of Norcia and their collection Benedicta. First is the story. Father Cassian Fulsom conceived of the monastery in 1995, gaining approval from the powers-that-be, assembling his band of brothers: eighteen men, half of whom, like Folsum, are American with the remaining brothers from various other locations. Folsum studied voice at the University of Indiana, carrying that experience into his monastic life and resulting ultimately in the present recording.

Benedicta is a collection of carefully selected plainsongs devoted Jesus' Mother, the Blessed Virgin. Mary. Marian veneration has always been a central tenant to Eastern and Western orthodoxy. The monks made it a point of select pieces that have been unheard or rarely heard. The monks include the original composition, "Nos Qui Christi Lugum," which melds modern with the ancient texts. The result is music of simplicity and warmth, captured in the center of well-managed acoustics. The recording gives a good sense of how the daily monastic worship is conducted and how the first music ever written down sounded. It is like staring through a time telescope into the past to something simple and pure. Yes, that is its appeal.

The Monks of Norcia; Father Cassian Folsum, Prior.

About The Monks of Norcia