By BRUCE LINDSAY
November 22, 2014
Sign in to view read count 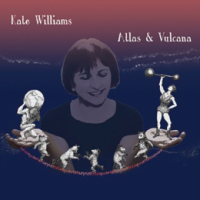 Atlas and Vulcana formed a strongman and strongwoman act—Vulcana's real name was Kate Williams—whose feats of strength were renowned in Victorian and early twentieth century Britain. Pianist and composer Kate Williams (no relation, presumably) takes inspiration from the couple in titling this album and two of its tracks. Atlas & Vulcana has its own strengths—no brute force, but plenty of power and dynamism. Williams has written some stunning tunes: she's also brought together a septet of some of the finest players in the UK. The combination is a winning one.

Williams' 2011 album, Made Up (Kwjazz) was also a septet recording: the following year she released Smoke And Mirrors (Kwjazz), a delightful duo recording with Scottish tenor saxophonist Bobby Wellins. Previous albums have featured trios and quartets—so it's clear that Williams has a command of a range of combos. There are one or two small-group tracks on Atlas & Vulcana too—"The Far Side," featuring Gareth Lockrane's flute playing, is a lovely, calm, quartet piece; "Recollection" is a strong but lyrical trio outing—but it's the septet numbers that form the bulk of the album.

"Strange But True" harnesses the instrumental power of the septet on an up-tempo tune that gets its drive from Williams, bassist Oli Hayhurst and drummer Matt Fishwick. The melody hits home straight away, the horn players trade short, strong, solos and Williams lets the whole thing fade away while the energy is still high. "Bear Hops" picks up on this energy and swing—the bebop mood is heightened by Alex Garnett's lively tenor solo.

Harold Arlen and Johnny Mercer's "My Shining Hour" is the album's only cover. Hayhurst and Matt Fishwick are key to the cheerful mood of the piece, swinging the rhythm. Some fine ensemble playing and solos from the horns herald Williams' own fast-fingered and swinging solo. "Atlas & Vulcana" opens the album as a trio piece and closes it as a septet performance. In both treatments Williams anchors the beat with a strong left hand. The septet arrangement is the more dramatic, but the trio version is its match in its creation of a distinctive, almost threatening, mood.