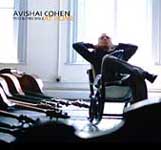 Israeli bassist/composer Avishai Cohen is perhaps best known for playing with Chick Corea, but he was never destined to be a sideman; his songwriting and arranging skills are too developed. On At Home—his first release since 2003's Lyla—Cohen demonstrates that his writing and arranging are as imaginative and wide-ranging as his bass playing is virtuosic.

He might be trying too hard to show all he can do, though. The album is divided between tracks featuring Cohen's trio with keyboardist Sam Barsh and drummer Mark Guiliana and a larger group that sometimes augments the trio and sometimes replaces it. The songs are all written and arranged by Cohen (except "Leh-Lah," cowritten with Guiliana, and "Renouf's Last Tooth," composed with Guiliana and Barsh). The music is uniformly well-played.

The quality of musicianship and Cohen's distinctive, melodic, thick-toned bass are the only uniform aspects to the CD, however. It's obvious that the bassist on the session is the leader: Cohen's simmering bass is always up front, prodding and pushing the group forward. He, Barsh, and Guiliana comprise an extremely tight band, whether they're displaying dime-stopping precision as a result of Cohen's arrangements, as on "Feediop," or simply showing a more natural connectedness, as on the looser "Saba." But Cohen puts the musicians into such diverse musical setttings that the album sounds at time like a mix tape made by a fan of great jazz bass playing.

Nothing wrong with most of the individual parts, though. "Madrid" has a beautiful arrangement built around a piano ostinato; here Cohen makes Anne Drummond's flutes and Diego Urcola's flugelhorn sound as lush and multicolored as a much larger band. "Leh-Lah" and "Gershon Beat" explore various folk-jazz genres and play with polyrhythms. "Remembering" and "No Words" are lovely, minimal trio ballads that are more platforms for Cohen's bass than vehicles for collective improvisation.

"Renouf's Last Tooth" is a trio number that begins with a flurry of bass notes that lead into a rapid-fire, complex, and busy piece that seems to intentionally mimic drum-n-bass electronica in a manner very reminiscent of the Bad Plus, who did the same when they covered Aphex Twin's "Flim" on These Are the Vistas. Then the song shifts into a sideways groove that sounds even more like the Bad Plus. "Punk (DJN)," too, with its heavyhanded, three-way virtuosity, has a very Bad Plus sound to it.

"Saba" is an electric number—just good ol' fusion—with Barsh on crunching organ, Cohen on electric bass and Yosvany Terry on soprano sax. This quartet configuration is repeated on "Feediop," the album's finest number, which has Terry burning on soprano before the group effortlessly shifts into a calmer bridge with a fine Barsh piano solo.

Good music. Excellent writing and playing. Incoherent CD. Cohen seems more interested on At Home in showing all he can do—lest anyone get an incomplete impression of him—than creating a unified musical statement. That's his prerogative as an artist, and he's got more albums to make.

Note: Razdaz Records is distributed in the United States by Sunnyside Records.