By DOUG COLLETTE
September 27, 2014
Sign in to view read count 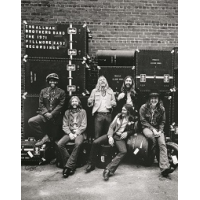 At least initially, the announcement of the release of additional recordings of the Allman Brothers Band at the famed (and now defunct) New York venue Fillmore East was cause for celebration. Upon closer inspection of the content and, in turn, its accurate placement in the context of the seminal Southern rock band's history, the joy dissipates considerably and, ultimately, leads the musiclover back to the original title At Fillmore East (Capricorn, 1971). Safe to say, it's invaluable for that reason alone.

Splendid as it is to have more shows featuring the original six-man lineup, especially in this pristine audio quality (on cd, Blu-ray and, in condensed form, vinyl lp), the fact is that the ABB repertoire at juncture of their career, as determined by founder and acknowledge leader of the group, guitarist Duane Allman, varied but a little (and perhaps rightly so for the purposes of recording these shows). Titles officially available direct from the Brothers' archives and elsewhere, that feature this finite list of tunes with, in some cases, some minor (and welcome) variations that might've appeared here, such as the first tune Gregg Allman brought to the group, "Dreams,." For all practical purposes, the open-ended improvisational approach the band took almost, but not quite, renders this point moot, but it's one worth making.

More recordings with "Skydog" and late bassist Berry Oakley are worth hearing here because the band was particularly primed for these concerts. But it's also true that more than a few tracks on The Fillmore 1971 East Recordings-"Trouble No More" and "Don't Keep Me Wonderin,'" tellingly, perhaps, both structured pieces-simply document why they were not chosen for release in the first place. And that doesn't include the show included here (again) from the closing night of Bill Graham's venue in June of 1971, where guitarist Dickey Betts flubs notes obviously enough "On You Don't Love Me" (before he hits a reel that ratifies his country roots) to suggest the delay of its eventual inclusion on the 'Deluxe Edition' of Eat A Peach (Mercury, 2006), there sans the intro from the late impresario included here.

The most devout of Allmans fans will dote on learning the intricacies of the takes of the latter number that Dowd spliced together for placement on AFE. But will dilettantes outside the Peachead community rationalize the miscues of the sextet, however slight or forgivable, and rightfully place those aberrations from the group's customary brilliance in its proper perspective? John Lynskey's essay, reverential to a fault, begs the question .

Above all, though, The 1971 Fillmore Recordings ratifies the shortcomings of the Allman Brothers' own archival efforts (and perhaps those of the 'Wolfgang's Vault' where some similar content resides). Forgetting the misconception that was the inclusion of horns the first night of the March run, how wise was it to simply recording over those tapes rather than preserve them for posterity (and perhaps a reminder of a good idea poorly executed). But above all, how did it happen that the final shows of the June closing of Fillmore East weren't recorded in their entirety?. If only ABB devoted a level of detail to their archiving as they did to their musicianship, but of course, that's the 20/20 of hindsight.

Even if some artists involved wouldn't render consent, given ABB's professional affection for Bill Graham (which, based on this intro of 6/27 was wholly mutual), the absence of those performance, perhaps equally inspired or more so than some from the previous spring, precludes (fortunately or unfortunately) any chance of the truly comprehensive package that The Allman Brothers Band Complete Fillmore Recordings purports to be.