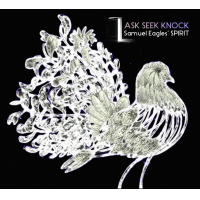 Spirit is the brainchild of British alto saxophonist Samuel Eagles and should not be confused with the now defunct American rock band of that name featuring the late Randy California. Eagles is joined here by his brother and tenor saxophonist Duncan Eagles who leads his own burgeoning band Partikel, which also includes bassist Max Luthert. Vibraphonist Ralph Wyld, whose notable debut album Subterranea, released in 2016 on Edition Records under his group name of Mosaic, plays a vital role here too. The rhythm section is completed by Sam Leak on piano and Dave Hamblett on drums, both in-demand players on the London jazz scene. Guest tenor saxophonist and erstwhile Jazz Messenger, Jean Toussaint adds his distinctive sound to "Hear His Voice" and "Dream and Visions Of The Son." The former track is very much a centrepiece, embellished by unison reeds, and both tracks weigh in at around the ten minute mark.

The opener "Eternity Within My Soul" is fairly indicative of the ensuing seven numbers, the richly textured and contrapuntal arrangements enhanced by the imaginative choice of instrumentation. There is more utilisation of the unison saxophones on the plaintive "Hope In The Hills." But perhaps the most immediately engaging track is the final, memorable title track, with unaccompanied twin horns initially stating the head, subsequently joined by the ensemble and altoist Eagles contributing a lithe, fluid solo.

Eagles's chosen name for his band is appropriate given that most of the tracks offer a religious or spiritual interpretation of one kind or another. Indeed Eagles revealed that his inspiration for these pieces arose following a period of turbulence and which he describes as his own "spiritual enlightenment." Not that this is an overtly ecclesiastical record, but it certainly conveys some heavenly sounds.

Eternity Within My Soul; Changed, Changing Still; Hear His Voice; Hope In The Hills; The Twelve; Dream and Visions Of The Son; Spirit; Ask, Seek, Knock.