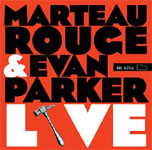 Saxophonist Evan Parker performs here with a France-based trio at a Paris venue, in a wily acoustic-electric exhibition and one that transmits yet another side of the artist's musicality. Parker's Electro-Acoustic Ensemble recordings for ECM Records are designed upon a large group layout. On this 2009 release, the electronics are placed a bit more in the forefront, where liquefying guitar and synth lines slice and dice through the numerous avant-garde metrics.

The foursome generates a sense of urgency ...

Conservatory-trained and prize-winning bassist/improviser Joëlle Léandre has aligned herself with new music advocates such as Anthony Braxton and Morton Feldman, among others. So it should be of little surprise that the esteemed bassist would extend her wares a bit by connecting with koto performer Kazue Sawai for a set brimming with minimalist themes and impassioned improv. The koto is a Japanese musical instrument that can have anywhere between 1 and 17 strings extended over ...

“Under Nubian Skies" is a swinging, well played record that shows Carlos Garnett dipping heavily into his Coltrane bag and Panamanian roots. Garnett, a legendary tenor man who is returning to performing after a self imposed exile has done stints with Freddie Hubbard, Art Blakey, Woody Shaw, Charles Mingus, Pharoah Saunders, and perhaps most notably as part of Miles's groundbreaking groups of the early 1970's.

Sometimes a breath of fresh air replenishes the desire and the ability to keep doing ...