Jay “Hootie" McShann was like one of those Russian dolls that you knock down and they bounce right up again. Right up until his death in 2006 at the age of 90, he was one of the jazz world's great survivors. Born in Muskogee, Oklahoma, in 1916, his spiritual and musical home was Kansas City, where he achieved his place in the history books for fronting the big band that introduced Charlie Parker to the world. It played the Apollo ... 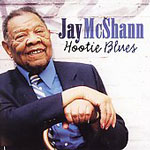 McShann (aka Hootie) is a Kansas product who made his name in Wichita and Kansas City in the 1930s and is likely the only survivor of those ...

Chiaroscuro was taping a live performance of Jay McShann's trio when lo and behold, in walked Phil Woods. Flip Phillips and David “Fathead" Newman all of whom happened to be on the S/S Norway for the 14th annual Floating Jazz Festival. The trio then lent their considerable talents to the session, with no rehearsal. Apocrypha or not, it makes for an interesting story and outstanding jazz music. The title of the album Hootie! is what McShann is known by to ...

If you're a fan of music that straddles that line between jazz and blues, Jay McShann's Still Jumpin' The Blues will hit you where you live. No one epitomizes Kansas City jump better than 83-year-old McShann, the smooth pianist and veteran band leader. McShann plays and sings with incredible energy on this charming set of tunes featuring guitarist Duke Robillard and his band, as well as sassy vocalist Maria Muldaur.McShann and Robillard are a highly compatible pair, and ...