The Boswell Sisters: Nothing Was Sweeter Than 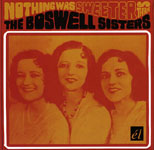 Jazz vocal groups have never been thick on the ground, and insofar as there is any such lineage at all, it's safe to say its existence is largely down to the Boswell Sisters. Their harmonies amounted to the opposite of sibling rivalry, and the liberties they took with tempo and key changes were to have a positive effect on a young Ella Fitzgerald and others.

The trio lacked the transformative powers of Louis Armstrong, who after all could give musical ...