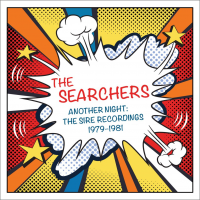 Even if its total run time of two hours approximate doesn't exactly constitute a voluminous collection deserving the appellation 'deluxe,' The Searchers' Another Night: The Sire Years 1979-1981 is nevertheless the absolute definition of a comprehensive anthology. It contains not only the entirety of the two albums this seminal Merseybeat band recorded at the label home of the Ramones and Talking Heads during the peak of punk and new waves-both the eponymous first and the successor Love's Melodies were released multiple times in different territories, with different track lists-but, in addition, another seven cuts of alternate mixes, outtakes and B-sides of singles unavailable for the past decade.

The previously-unreleased version of John Hiatt's "Ambulance Chaser," a Little Village-era composition written some ten years subsequent to this great songwriter's other original here, "Back to the War," is thus notable in itself. But the intelligence and good-humor (not to mention the svelte instrumental flourishes) of both those tunes are also as representative of the high caliber of material the latter-day Searchers elicited when they resumed their recording career. This pair of CD's is peppered with tunes from estimable names such as Tom Petty (the ever-so-graceful "Lost In You Eyes") and Bob Dylan ("Coming From the Heart"), not to mention the likes of the latter-day soundalikes the Records: an ever-so-slight twang comes through the chime of "Hearts In Her Eyes"), a reminder of what a wondrous source of invention is the format of two guitars, bass and drums combined with harmony vocals.

Given the timeline of these recordings, it's worth noting Nick Lowe also recorded "Switchboard Susan," on which track the Searchers' teeming confidence actually furthers the wry tone of the song. Juxtaposed with Creedence Clearwater Revival leader John Fogerty's "Almost Saturday Night," Moon Martin's rootsy exercise in style, "She Made A Fool of You," only enhances that songwriter's reputation in retrospect. And then there's Big Star's "September Gurls," a prescient choice if there ever was one: this archetypal number by the eventual cult favorite derives directly the sound of the Searchers: its chiming electric guitars mirror seemingly effortless group vocal harmonies radiating the positivism inherent in these projects as recounted by band members in speaking with essayist Scott Schinder.

Further illuminating the chronology of a music as infectious as it is seductive (and totally bereft of either self-consciousness or any disingenuous air), those interviews document these British contemporaries of The Beatles speaking with all the forthright modesty they displayed when they were playing and singing. It's not clear if the music was remastered from the original tapes, so while the size of the sound on these twenty-nine total tracks isn't all it might be, it's still an accurate enough replication of what the foursome sounded like at the time of their Sixties hits like "Needles and Pins.

And aside from audio quality (or seeming lack thereof), the only other discernible drawback to Another Night: The Sire Years 1979-1981 is kitschy, garish cover art that belies the durable grace of the sounds inside: was there no better choice given the multiple graphics (or alternatives thereof) depicted in the CD booklet. Still, that relatively minor blemish on this package of the Searchers is nowhere near enough to put off any potential musiclover from owning what is an otherwise valuable artifact of timeless contemporary rock and roll.

CD 1: Hearts In Her Eyes; Switchboard Susan; Feeling Fine; This Kind Of Love Affair; Lost In Your Eyes; It’s Too Late; No Dancing; Coming From The Heart; Don’t Hang On; Love’s Gonna Be Strong; It’s Too Late; Love’s Melody; Silver. CD 2: Silver; Infatuation; She Made A Fool Of You; Almost Saturday Night; Little Bit Of Heaven; You Are The New Day; Love’s Melody; Everything But A Heartbeat; Radio Romance; Murder In My Heart; September Gurls; Another Night; Sick And Tired; Changing; Back To The War; Ambulance Chaser.