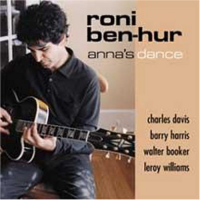 While Roni Ben-Hur has been on the scene since the mid-1980's, when he moved to the United States from Israel to study with Barry Harris, he still remains unknown to the larger listening public. With the release of his first Reservoir recording, though, Ben-Hur has proven himself to be a proficient and insightful musician with a clarity of tone and concept.

True to his friends who have supported him from the beginning, Ben-Hur has included Barry Harris, Walter Booker, Charles Davis and Leroy Williams on Anna's Dance. Thus, the treat of the CD is quadrupled. Even though he is heard in New York where he continues to teach and inspire, Harris records too seldom. We get to hear him once again, relaxed and insightful as he enriches each of the tunes. Beyond Harris' participation, though, the entire group maintains the same interest in, and same feel for, their music, thereby attaining a unity of sound that's affecting and yet near the edge.

"Anna's Dance" refers to Ben-Hur's daughter, whose grace must be a sight to behold since the tune itself seamlessly and subtly changes movements from meditative warm-up to the glide of a light samba. Just as important, though, is the mature comfort that Ben-Hur expresses as he unfolds his solo, layer upon layer of variations eventually assuming a total shape once the piece is done.

Saxophonist Davis blends into the group, his warm tone reassuring even as it contains an almost unnoticeable bite. Strayhorn's "A Flower Is A Lovesome Thing" allows Davis to stretch out in a way reminiscent of Joe Henderson, and yet the tune gives Harris the opportunity to reach the emotional essence of the tune. In fact, Harris contributed two of the tunes for Anna's Dance, "For Dizzy" giving Booker a showcase for setting a bass-led foundation upon which the others build. Harris' other tune, "Minor Fable," follows serpentine lines as an improvisational springboard for the others.

Yet, the sound of the recording always evolves back to Ben-Hur, whose ability to listen to his friends' ideas even as he gently leads the group makes the listener take notice. Ben-Hur's wordless invitation to his music can't be denied.

So Nice, Visa, Anna's Dance, Love Is A Many Splendored Thing, A Flower Is A Lovesome Thing, For Dizzy, Minor Fable