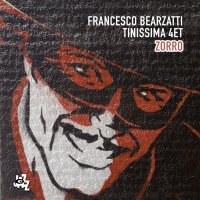 "Jazz is the music of liberation, of resistance to injustice, of romance and adventure, and sometimes of conflict. Its true identity has always been double rather than singular. At around the same time early jazz was thrilling audiences, readers were gasping at the adventures of a masked man called Zorro who had been called up out of the darkness of oppression to set things right [leaving his mark on the wall each time]. On the centenary of Zorro’s creation, saxophonist Francesco Bearzatti and his Tinissima quartet present CAM JAZZ’s latest contribution to widescreen jazz drama. Zorro is a wild suite of big cinematic themes, romantic interludes, sweeping landscapes and breathtaking chases. If the cliché about jazz as a cinematic experience ever meant anything it is this. With trumpeter Giovanni Falzone, bassist Danilo Gallo and drummer Zeno De Rossi, the saxophonist who once declared, with Woody Guthrie, that “this machine kills fascists” restores jazz’s association with the redress of injustice. Zorro isn’t a political lecture, though; it’s an entertaining and deeply moving journey across a dreamed landscape that we all secretly share. And remember that “jazz” ends with not one swept “z” but two… " (Brian Morton) Under the supervision of music producer Ermanno Basso, Zorro was recorded and mixed in February 2019 by Stefano Amerio at Artesuono Recording Studio in Cavalicco (UD), Italy, and mastered by Danilo Rossi.

All About Jazz musician pages are maintained by musicians, publicists and trusted members like you. Interested? Tell us why you would like to improve the Zorro musician page.