Clare Fischer: After the Rain 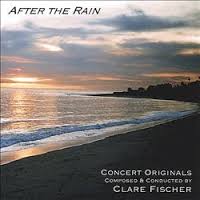 The late Clare Fischer, best known as a multi-award-winning jazz composer / arranger, also had a classical side, one that is paramount on this engaging album whose themes were written over an extended period of time from Fischer's days as an undergraduate at Michigan State University to his later years as a renowned jazz artist whose extensive body of work has been acclaimed by musicians and fans all over the world.

The portfolio is divided into three parts: first, a three-movement Suite for Cello and String Orchestra, followed by the three-movement "Time Peace" and finally, "Bachludes I and II." The suite's second movement, "The Early Years," was written while Fischer was a student at MSU in East Lansing but was not recorded until 1999, with Cecilia Tsan as soloist. Fischer was so impressed by her virtuosity and comprehension of his musical ideas that he wrote Movements 1 and 3, "After the Rain" and "Finale," especially for Tsan, who recorded them with Fischer's orchestra later that same year. The Suite is sumptuous and seductive, Tsan's performance impeccable.

"Time Piece" was so named because forty-four years elapsed between its conception and consummation. The first half was envisioned and scored in 1953, the second completed in 1987. The opening "Homage" is to Igor Stravinsky, while the "Elegy and Blues," Fischer noted, epitomized his "duality . . . as a composer." The third movement, "Fugue and Finale," is "jazz-like in phrasing but not in choice of notes." Again, the music is elegantly written and would not be in the least out of place in any reputable concert hall. The same can be said of "Bachludes I and II," which use harmonic principles espoused by the great Johann Sebastian Bach as the springboard for a pair of evocative essays for string orchestra.

It can be argued, of course, that this review has no legitimacy on a website devoted to jazz—to which we must plead guilty as charged. The album has, however, clearly been described as what it is, a series of classical themes written by a composer whose jazz credentials are exemplary. Those who have heard and appreciated Clare Fischer's music over the years may find his "alter ego" of some interest. Others may not.

Title: After the Rain | Year Released: 2014 | Record Label: Self Produced