Jamie Ousley: A Sea of Voices

By HRAYR ATTARIAN
June 6, 2012
Sign in to view read count 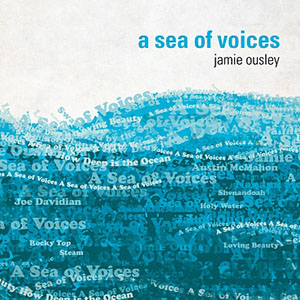 Bassist Jamie Ousley carries the distinction of being named the best south Florida jazz musician,and his A Sea of Voices is a testament that he has indeed earned that honor.

Bodies of water inspire the ten tracks that comprise an album that possesses, for its unifying theme, a quiet yet robust religious spirituality. Coldplay's "Swallowed by the Sea" is a classically tinged piece with a palpable—or, rather audible—devotional quality, especially in Ousley's arco bass opening that melts into a sweet and reverend melody played by the quartet—with percussionist Carlomagano Araya sitting in—with brief yet tasteful, individual improvisations.

This kind of mellow and effervescent style marks most of the record. On the uplifting "With You," Ousley's longtime collaborator, pianist Joe Davidian, maintains the romantic ambience, his inventive lines, although remaining close to the melody, characterized by sublime economy, without ever skimping on harmony.

Ousley's own compositions maintain this gospel-like atmosphere. On "Holy Water," the undulating sounds of piano and bass are like the singing of a choir, while on the poetic "Hymn of the Tides," Davidian and Ousley alternate mellifluous solos, with drummer Austin McMahon mimicking the gentle crashing of waves against the shore.

The disc's calm musical façade is perturbed by an ethereal vocal and bowed bass duet on the traditional "Shenandoah" and the tango-esque Argentinean folk song "Alfonsina y el Mar," which features guest pianist Gabriel Saientz leading the trio into an effortless and graceful glide across this melancholic piece dedicated to tragic literary figure Alfonsina Storni.

Always serene but never dull—indeed, quite enchanting—A Sea of Voices showcases Ousley's virtuosity as a bassist, his honed skill as a leader and his immense talent as a composer. It also demonstrates his dedication to the environment, as all proceeds from sales go to benefit Sunshine State Interfaith Power and Light, a faith-based environmentalist organization.

Hymn of the Tides; How Deep is the Ocean; Steam; Shenandoah; Rocky Top; Loving Beauty; Swallowed in the Sea; With You; Holy Water; Alfonsina y el Mar.