By MARCIA HILLMAN
January 14, 2010
Sign in to view read count 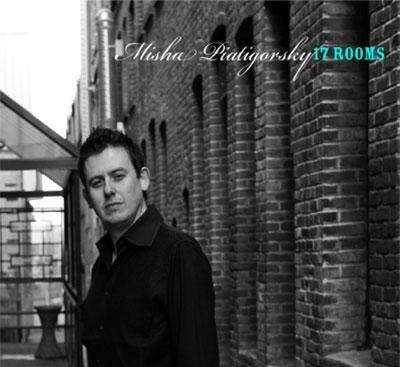 A clue to pianist Misha Piatigorsky's 17 Rooms is the title of its opening track, "Open Window"—a window that lets in a breath of fresh air. Joined by bassist Boris Kozlov and drummer Ari Hoenig, Piatigorsky offers a mixture of bebop, gospel and classically-based styles that shows off his pianistic and composing abilities.

The material is all original with the exception of three selections. As a composer, Piatigorsky is melodic and innovative. He displays a healthy respect for song structure that is refreshing in this day of jazz writing that consists mostly of riffs and snippets of melody that writers call "songs." Piatigorsky likes the minor keys (perhaps it is his Russian soul), but his songs are not at all sad.

As a performer, Piatigorsky shows the solid classical foundation upon which he has built his style. He can change from block chords to single notes in the blink of an eye and tastefully inserts some dazzling runs on the way. He is playful at times, given to tempo changes within a composition (as in the title track) and is always passionate. He is inventive—approaching John Lennon's "Imagine" with a straightforward playing of the melody, but reharmonizing the chords and encasing the song in the language of gospel. He paints pictures—as in the original "Blackfire," which blazes with colors.

His band mates are very much a part of this musical equation. Kozlov's lyrical style and mellow sound is featured on "Kindred Spirit" and on the bop-flavored "Blues For Fools." Hoenig is always there, but never over the top, his wonderful way with the cymbals on the title track and interplay with the leader on Wayne Shorter's "United" prime examples of his skill.

But most evident on this CD is Piatigorsky's free spirit that shines through each and every track. Enough said. Go listen.