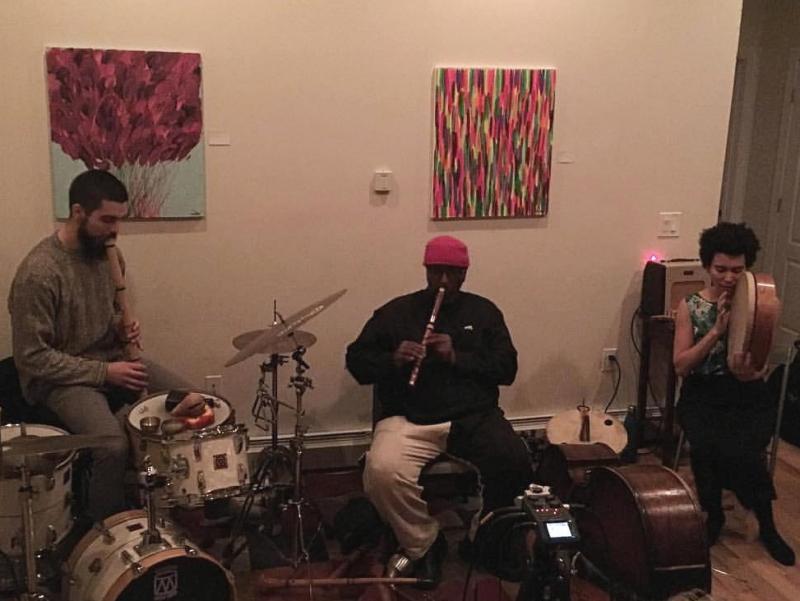 Sometimes, the underground is also the above-ground. Such is the case on the free improvisation scene in New York City, where one is more likely to see well-known players at a house show or pop-up venue than in a club. In this spirit, Pratt Institute Professor Cisco Bradley has maintained a blog and performance series he calls "New Revolution Arts," opening his home to "the emerging generation of artists playing new improvisational, avant-garde, and experimental music in Brooklyn." The grizzled man-about-town William Parker may not be "emerging," but his collaboration with the younger Anais Maviel and Leonid Galaganov is new.

The three connected by way of Parker's organization, Arts for Art, and began a collaboration in 2015. I heard some of the results in April 2017. Evoking this deeply whimsical music in words is a daunting chore, one I feel is best done through poetry. Here, though, I will give the play by play—a rapid procession of unique instruments and inspirations—and invite you to add your own imaginings. The set began with gentle treble sounds from Galaganov's triangle and cymbals. Brushes swirled on the snare drum with isolated kicks beneath. Maviel was striking a lyra (Greek string instrument) below its bridge, resulting in ethereal high-pitched twanging. Parker waited, poised to play a bamboo flute. Muted hits from cloth- covered mallets on the snare followed, building up to the screech of a bow rasping over the edge of a cymbal. A small mokugyo (East Asian hand percussion) sat on the snare drum, emitting wooden purrs. A series of triangles between the hi- hat and ride cymbals sounded off. Galaganov's cowbell placed punctuation around Maviel's rising breath. She had been groaning so faintly that it barely emerged from the texture of small sounds around her. Her voice slowly rose to a more audible whine as she struck the lyra with hammers. Galaganov had dug around in his toolkit to produce a gong now suspended from his right hand. Parker added some chit chat with his flute. A hint of a march beat emerged, loping forward in fragments. In response to this evolving rhythm, Parker stowed the flute and produced a muted pocket trumpet. Maviel began twisting notes slightly and bending strings on the lyra for fluctuating lines. Behind the drum set a clave appeared. Parker moved to match Maviel's notes. The mute came off of the trumpet, Galaganov reversed his mallets for more volume, and Maviel took a bow to the lyra, further revving up her voice. With each scrape of the bow she now rose in pitch and force. Galaganov came out with a "waterphone," a metal disc filled with water and attached to rods of varying lengths that could be bowed or struck for different pitches. The wobbling whines of the metal goaded Maviel into a near-screech, echoed by altissimo gasps from the trumpet.

This edgy moment gradually softened. Parker moved onto a small Serbian flute. Maviel eased off on projection. Galaganov put down the waterphone for a shakuhachi (Japanese flute). Now all three were in a more melodic realm, pentatonic passages from the similarly tuned flutes mingling with Maviel's mid-range. There was a sense of peaceful clashing, with no particular effort to mesh voices. After a few minutes of toning, Maviel exchanged the lyra for a frame drum, raised it to her face, and sang gentle "oohs" into it. Galaganov and Parker fell into separate ostinatos as Maviel's fingers drummed before her. She soon moved into a vocal analogue of the rhythm, fluttering between long vowels. Galaganov put away the shakuhachi and turned to a small battery of singing bowls on his floor tom. Parker moved back to his own bamboo flute and traded short phrases with Maviel. The echoes carried on, stretching out to longer bursts of fifteen to twenty seconds. Galaganov came up with two gongs. Parker picked up the upright bass that had been laying before him and launched into bowing harmonics in the higher register. Bowls, voice, and bass built up again to a large, tottering structure.

The ambiance of a jazz song snuck in along with the bass, and lyrics were soon issuing from Maviel's mouth. "I let," she cried, and Parker snapped into plucking fat single notes, still holding the bow with his pinky. "I let the sun set." The bass snapped and popped. "I let the wind blow. I let my tear drop." Now Galaganov set down lightly on the snare and all three walked along. "I let," belted Maviel, "the spirit within myself-I let the spirit infuse its wisdom in myself. I let the war end." They had nearly swung into a blues, but no motive in this set was meant to last long. On a hefty cue from the bass, all three stopped their motion. Maviel picked up her n'goni and strummed; Parker complimented her with minor modal phrases. Galaganov remained on his drum set but struck softly. Watery sighs emerged from Maviel as she found a home between her strummed notes, and the group slowly faded out. World instruments still lined the floor, some unplayed, but the spirit had passed. The tiny but enthusiastic audience offered warm applause. Who knows where these winds now blow?