By NENAD GEORGIEVSKI
May 25, 2005
Sign in to view read count
Vlatko Stefanovski, Miroslav Tadic and Teodosii Spasov
Novi Sad Synagogue
April 26, 2005
Something beautiful happens when one observes a master craftsmen doing his work. It is even more fulfilling when you see that the result of what he does is astounding and brilliant. This is just what happened during the performance of Vlatko Stefanovski, Miroslav Tadic and Teodosii Spasov when they presented their latest work "Treta Majka at the Jewish Synagogue in Novi Sad. Ever since this project started several years ago, "magic" is the common denominator of all the reviews of their concerts.

What better place for two guitars and a flute than a synagogue.This holy place was built at the beginning of the previous century and since 1966, because of its acoustics, it serves as a concert hall for classical music recitals and early music performances. One can feel its history when entering this place and it proved to be a fantastic setting for what these musicians came to present. Even the musicians were absolutely spellbound by its special aura, as Vlatko, who has previously performed millions of times in this city before, stated that should he have known about this place he would have played there earlier. There was electricity in the air as we were awaiting for the musicians to appear, all the more amplified by the expectations of 700 people.

The performance started with the guitar duet playing "More Sokol Pie and from the first moment the music started until the last note played that night, regardless of the tempo of these folk tunes, the adrenaline and the chemistry were so high that whatever they played seemed very explosive. The rapport they had with the audience augmented even further that feeling. Stefanovski has that special sense and gift that makes people feel as if they are witnessing something unique and special, and there is no overstating how much guitarists Vlatko and Tadi' still continue to astound. Somehow, the audience felt as if they were listening in on two people having a conversation, but rather then using their vocal chords, they were using guitar chords. 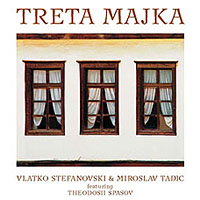 Both the electricity of the music and the performers' mutual admiration permeated every corner of the hall. The intensity level rose as the duet went into performing upbeat tunes and reels such as "žEj Ti MomÄe OhridjanÄe"(Hey You, Ohrid Lad), "More ÄŒiÄo reÅ¡i da me Å¾eni" (My Uncle Decided to Have me Married), "ProÅ¡eta se Jovka Kumanovka" (Yovka from Kumanovo Went for a Stroll), Ni Prela Gora Ni Tkala (The Forest Doesn't Weave Nor Does It Knit) "Jovano, Jovanke"(Oh You Yovana), "Sano' Sedam Treno" (No Sleep For Me, Treno) "Pajdushka." It is interesting to note that a week prior to this performance the Macedonian Philharmonic Orchestra played here and the soloist, the young pianist Simon Trpcevski did his own version of the "žPajdushka" reel, as an encore. Later they were joined by the Bulgarian kaval player Teodosii Spasov, whose kaval playing abilites proved to be astounding and very broad, as he breathed all kinds of sounds from his instrument. Even though it was hard to think it possible, the intensity level rose even more as all three players traded a whirlwind of notes. Together they did tunes like "Ne si Go prodavaj Koljo ÄŒiflikot (Do Not Sell Your Land Kolyo), "KalajdÅ¾isko Oro (The Tinsmith's Reel), "Opa-Iha . It seemed that their musicianship took the music to higher planes and unknown territories. They played with confidence and authority, not afraid to test themselves as musicians, as well as to test their audience. For the first encore they did a version of a Turkish folk tune "Anadolu Oyn Havasi and they closed the show with "Dafino Vino Crveno (Dafina with Cheeks like Red Wine).

The enraptured audience was willing to open up to the music's melodic and rhythmic complexities and sat there mesmerized by it. The musicians delivered a fiery, high-caliber show for which were rewarded with several standing ovations from the 700 in attendance. By the time the concert ended, the audience jumped to its feet, clamoring and whistling and genuinely impressed by the realization that something special had just happened on stage. They didn't want it to end. To me this was a superlatively moving experience. Two hours had passed by as each song had ebbed and flowed, rocking the walls of the sinagogue as if it was a ship taking us all on an extended breathtaking journey. They were two hours worth remembering.