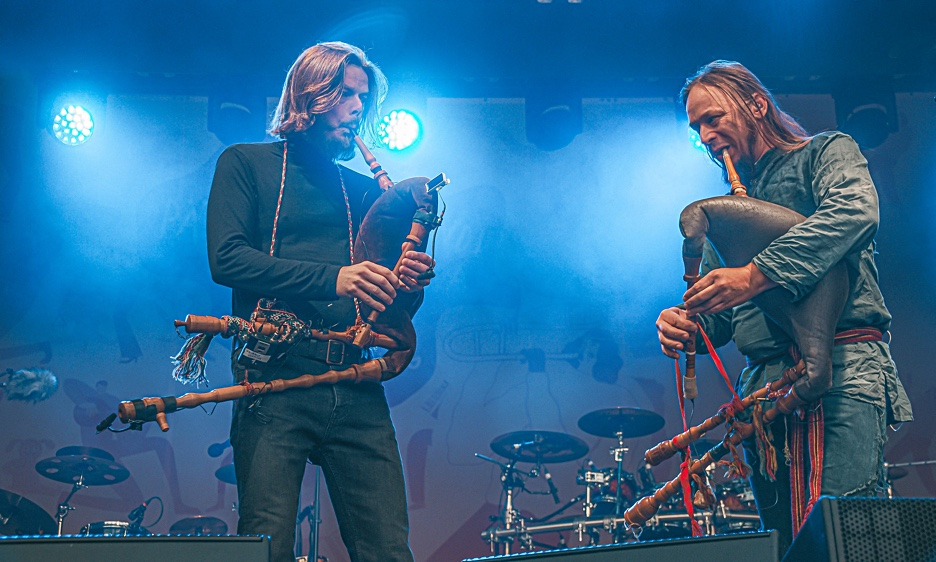 Viljandi must be a quiet place in usual times, situated down in the south of Estonia, and emanating a small town vibration. Usually its annual four-day folk festival magnetises a massive gathering, and invites multiple international acts, fully inhabiting an impressive location in the Viljandi Castle Hills. This 28th edition still seemed somewhat busy, when compared to recent times, even with its reduced attendance limit of 5000, around a fifth of the accustomed capacity. The site drops down to an idyllic river expanse, with high, clefted mounds connected by ridged walkways. In a 'normal' year, surely folks would be gambolling down these gradients, unable to fit on the pathways. There were three main outdoor stages, with additional intimate indoor theatre performances. Even amidst virus-era restrictions, the VFMF still managed to bring in artists from a significant number of lands. Ireland, Belgium, Denmark, Georgia, Hungary, Finland, Italy and Latvia were all represented, alongside a core of Estonian players.

The emphasis is on the traditional heart of folk music, although some artists strike out towards various blends with such forms as pop, electronica, turntablism or heavy rock, usually with the old ways retaining integrity within such settings. There were also a clutch of eccentrics in the old castle grounds. The Finnish diatonic accordionist Antti Paalanen played two sets, both equally unhinged. His seemingly permanent voice is deeply rugged, hoarse and dramatic, as he spins out childlike tales and concepts, filling the avant folk spread with deliberately naive humour. Paalanen merges the stances of Kimmo Pohjonen, Albert Kuvezin and Ivor Cutler, as he sings boisterous ditties about the bees and the stamens, resonating with multiphonic throat-singing depth, and stretching out his bellow-length to the limit. He considers this activity to be superior to a spell in the gym. Paalanen pumped and wheezed, then stippled, with a rollicking swagger, his voice straight out of a child's nightmare. His performance was akin to a virus-dream of how a festival might be, post-pandemic. Paalanen coaxed the crowd into dancing, entering his strange universe of surreal simplicity, demanding that they sing along louder, so that the bees and the plants would hear. He stomped his big leather boots for a bass drum effect, and proceeded to rip out polkas of the most vigorous type.

ZeMe arrived from Latvia, a duo who smeared together folk and trip hop, with Laima Jansone playing the kokle box zither, which has the Finnish kantele and Estonian kannel for siblings. The enigmatic Monsta manned his electronic decks, pleasingly spending much of the time in vinyl-scratching mode, an activity which should still be encouraged nowadays. Whilst not strictly trip hop, this sonic field is the most fitting way of describing ZeMe's downtempo mood-slinking. Jansone deftly picked her strings as if she were Herbie Hancock, slinging his keytar, using effects pedals to expand her sonorities. Monsta cut and faded, with the castle walls seemingly adding to the crystal acoustics. Perhaps this ruin- backdrop stage had the finest of the sound systems anyway. The pair prompted some slow-waft folk dancing from the crowd at the front, selecting a jaw harp, matched with electroacoustics, a glass-scratching crunch with silvery string surround.

The best straight-ahead acoustic folk group at the festival was the Hungarian quintet Pásztor Hóra, who delivered two totally energised sets, sparked by crazed cimbalom and inflamed bagpipes. Together since 2014, the members also brandished flutes, fiddles, jaw harp and percussion, with most of them singing lustily. Pásztor Hóra played at staggering speed, still filling its songs and tunes with an immense amount of micro-embellishments. The group also displayed a fine sense of dry humour, quipping throughout. This was a winning way to finish the first night, and then to greet the second day, on the same stage. Perhaps Pásztor Hóra had been playing all through the night!

Some of the festival's most striking performances involved degrees of musical melding, with a pair of Estonian double-groups conquering the main stage on consecutive evenings. On the Friday, Riffarrica and Metsatöll combined hardcore bagpipe folk with heavy rock guitaring, although the lines between band members weren't so divided, with both acts boasting bleaters, creating the opportunity for face-offs alongside hair-shaking axemen. Bagpipes and riffing guitars alike formed a wall of extremity. No side became compromised, amidst a sonic mix of equality on the sound desk.

On Saturday, Svjata Vatra and Žurba joined hands for an Estonian-Ukrainian celebration, the latter being a mostly female group of Ukrainians, resident in Estonia, and performing together for nearly three decades. Svjata Vatra is a combo led by singer and trombonist Ruslan Trochynskyi, also Ukrainian, featuring his daughter Rute, in a notable solo singing role. He was clearly garbed in the 1980s, both musically, and in his military-denim dress-sense, rocking out with his band, then shooting jazzed 'bone solos hither 'n' thither, folk and funk well-matched. Meanwhile, Žurba provided the hardcore vocal polyphony, and young Rute revealed her advanced stagecraft confidence, along with her nonchalant gift for sensitive phrasing. Her star quality is surely growing rapidly.

Of course, the most popular Estonian folk or folk-fusion artists were present, with the eccentric Puuluup duo matching rooted old bowed talharpas (strange-looking box- lyres) with an electronic panorama, this time joined by a guesting drummer for the final stages of their set. Even without grasping the Estonian language, it's clear that this quirksome twosome have doubled dry wit personas, even when they opted to go for a face-down swim across the upraised arms of the crowd. It seemed like the virus-days were over!

Mari Kalkun keeps her tunes and songs more traditional, opting for an acoustic transparency, a delicate exposure of her sometimes faint voice and kannel string-stroking. Her multi-instrumentalism seems to be increasing, and this was a much less compromised set when compared to her overly accessible showing at the 2020 Tallinn Music Week. It was as though she'd vowed to keep it folksy for Viljandi. Trad.Attack! didn''t keep it too folksy, with its bombast drum-booming and its crowd-poking jump-alongs, but observing the actual torupill bagpiping prowess of front-woman Sandra Vabarna, it's clear that the band possess a pulsating hardcore traditional music heart, although surrounded by single- minded beats and frenetic guitar riffing.

Next year, the Viljandi Folk Music Festival will surely return to its usual scale, inviting even more international acts, but in 2021 it didn't fare so badly, managing to import artists from eight outside lands. With 5000 ticket-holders on the site, the long weekend still felt like a substantial gathering, almost certainly preferable to the full, pulsating 25,000.