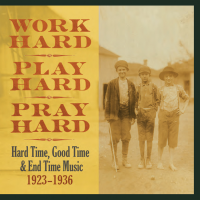 There is always complaint that American contemporary musical life is at turns either too glitzy or overly-intellectualized. Either claim is overly simplistic, neither completely wrong. And in no area is it more true than country music. On one hand, there is the proud stupidity of Toby Keith and Gretchen Wilson. On the other, the self-consciously literate indulgences of the Americana movement. Great stuff still lives on in the margins, but it's hardly the norm.

Early country music was healthy in that the people who got the recordings made seemed to regard the audience as a constituency whose record-buying was a mirror to who they were and what their lives were. The best producers of the age—most notably Ralph Peer and Art Satherly—started out in the furniture business, actually meeting the people who bought record players. They knew these weren't rich people. And they bought poor people music—string band pre-bluegrass country songs about work, church, and love.

Work Hard is a compilation taken from the collection of Don Wahle of Louisville, Kentucky. The late Wahle was a collector and dealer of old hillbilly records, and his collection was comprehensive. When he died (March 2010), his house was a hoarder's shambles to which a clean up crew was dispatched to empty the place. One of the crewman called his friend, collector/producer Nathan Salzburg, with news of "old timey" records he might want to rescue before they hit the dumpster. Salzburg, expecting the usual common forties hits, almost didn't get off the couch. But curiosity won out, and Salzburg wound up burrowing through the hell of cardboard and mildew that is the 78 collector's province. His yield was momentous. Wahle seemed to have collected every record he could find, and his collection took in every kind of white southern music sung in English (meaning it seems he didn't buy anything Cajun).

Records were dragged out of Wahle's house, which seems to have been completely filthy. A great many records were mildewed, crumbling, and diseased looking. But Salzburg loaded his pickup truck with whatever didn't break in his hands, and a massive cleaning and listening effort was on, resulting in this anthology.

(Reviewer's note: I am a 78 rpm collector and no stranger to being face down in a dumpster full of old records. I am here to report that Salzburg's experience is equal parts excitement and hellish, unsanitary work. Cleaning old records is a long and arduous task. What I am implying is that the energy expelled just to make these records listenable is worthy of mention. Also, a shoe brush is the best thing I've found to extract mildew from a 78.)

Organizing the best of the material into a three-disc set (devoting one disc each to work, play, and God) gives the anthology a traceable form. Also, the focus here is squarely on old hillbilly music, so there's a firmer stylistic continuity through this set than what has become the norm post-Harry Smith Anthology Of American Music reissue. While this was regular-issue commercial country music, it is mainly Depression Era stuff and definitely not modern sounding by any means. The musicians in this set are doing a style of country music that is makes the Oh Brother, Where Art Thou? soundtrack look by comparison like Van Halen.

There's a richness to this music. This is not to say all country music of the period was this good. The biggest hillbilly music star prior to Jimmie Rodgers was Vernon Dalhart, who was very much the Kenny Rogers of his day. But Wahle had some taste, as does Salzburg. The usual stalwarts of the era—Fiddlin' John Carson, Mac McClintock, the Georgia Yellow Hammers et al—are represented, but most of this music is the stuff known only to collectors. Which is a shame, because there's not a cut here that doesn't feel like it still means business. Gid Tanner's paean to loafing, "Work Don't Bother Me" is still a joyous "go to hell" to industrious living. The Allen Bros' "Chain Store Blues" comes across as timely, and Fiddlin' John Carson's "The Farmer Is The Man Who Feeds Them All" is almost an indictment. The temptation to write these artists off as naive bumpkins fades quickly when the clear-eyed view of hard work meets sharp wit, and there is plenty of that here. About the only thing these artists treated with uniform respect was spiritual deliverance. The third disc of the set is devoted to that topic, and it is joyous and moving.

The package is a graphic feast, complete with a richly illustrated book with great essays, as is always the way with Tompkins Square's sets. But if the music didn't pull its weight, who would care? So often, the stories behind these packages are more compelling than the music itself. Tompkins Square, whose primitive gospel sets are among the reissue highlights of the last few years, have again given us something indispensable.