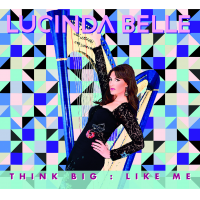 Oscar nominated singer-songwriter Lucinda Belle isn't the first to do what she does, but she may be among the most eclectic; the vocalist/harpist keeps tradition alive by feeding it with myriad influences. Though her vocal style and choice of instrumentation often suggest jazz, she reaches well beyond the idiom while staying true to its roots. Her most recent offering, Think Big: Like Me pulls from jazz, pop, reggae, doo-wop, R&B and hip-hop, among other styles, to create an engaging pastiche that retains Belle's strong compositional voice throughout. The end result is consistently interesting and satisfying, something at once familiar and novel.

Belle's voice is bold, full of personality with, on occasion, an edge, recalling modern songstress Amy Winehouse, but it has a sweetness as well, bringing to mind legends like Peggy Lee and Julie London. Tunes like the single "Baby Don't Cry" have her moving between both worlds in arrangement and performance. "Do Me Right" and "I Believe" are other examples; Belle's voice is full of drive when needed and, often in the upper register of her rich alto, sonorous and masterfully controlled when the moment calls for it.

The album jumps playfully from sparse and antique instrumentation to contemporary production and style, and more often than not the change happens within one song. "New Boy" alternates between voice and harp and a driving rhythm section, almost recalling neo-soul, to create something timeless from the styles of two vastly different times. "My Only Lament" keeps the accompaniment floaty and reminiscent of a classic production from the 1960s, while "I'll Be Loving You" harkens back to the 1950s. Just a few songs later is "The Other Side of You," which sounds like something that may have played on the radio circa 2010.

Belle says emphatically of Think Big, it's "a break up album!!! 'I'll Be Loving You' was my first song on the album,... I wrote it still crying from the break up... and I put 'Don't Go Chasing Your Heart' at the end of the album to represent the transition and realization I'd been through, throughout the process. There's something here for everyone I hope!" Indeed, Belle says it best when she says there is something here for everyone. From melody and harmony to lyrics to production, the album is strong and will benefit from multiple listens.

Baby Don't Cry; Where Have All The Good Men Gone; I Believe; New Boy; Do Me Right; My Only Lament; Time Won't Wait; Nothing Left To Do But Smile; The Other Side Of You; Washed Up On Love; Do Your Time; Don't Go Chasing Your Heart.