By JAKOB BAEKGAARD
December 12, 2017
Sign in to view read count
Percussion is often seen as the spice that is added to an ensemble carried by chordal instruments, but something interesting happens when the use of percussion is allowed to shape the aesthetics of a composition. Early on, minimalists like Steve Reich and Terry Riley have realized the potential of percussion and have used it to bring a breath of fresh air into the dusty study room of classical composition. In a sense, it is also a paradigm shift changing emphasis from melody to rhythm or using rhythm to create melodies, often using techniques such as repetition, counterpoint and layered textures. Yarn/Wire and ensemble, et al. are two percussive driven groups who use percussion in different ways, but both share the ambition of making it a crucial part of their musical expression. 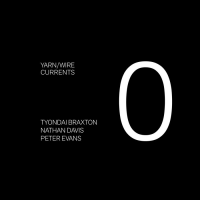 Since 2005 when the group was formed, Yarn/Wire has challenged the conventional idea of a chamber ensemble. The group consists of two pianists, Laura Barger and Ning Yu, and two percussionists, Ian Antonio and Russell Greenberg. It has been the strategy of the group to commission some of the most interesting composers in modern composition to write pieces and the latest installment in their Currents Series is no exception. So far, four volumes have been released, all with sparse, white covers, but volume 0 has a black cover and could both be considered the end and beginning of the series. No matter what, the album is an ideal introduction to the singular and poetic universe of the group, with three different composers contributing pieces.

It all starts with Tyondai Braxton's "Music for Ensemble & Pitch Shifter Delay" that moves in changing waves of repeated piano patterns resembling multiple clavichords played at high speed while the organic sound of percussion both interrupts, supports and functions as counterpoint. The musical landscape ebbs and flows and suddenly it unfolds in gorgeous bell-like harmonies.

Both Nathan Davis' "de Clocher a Clocher" and Peter Evans' "Returns" are more than twice the length of Braxton's piece and the extended length (18-20 minutes) is used to create complex and meditative pieces that both feel spaced out and dynamic in their rhythmical approach. Temple bells ring as hushed piano chords are allowed to linger in the air on "de Clocher a Clocher." Peter Evans' piece also uses the tension between silence and sound, but in a more dramatic way that paints with large and sudden brushstrokes from piano and percussion. 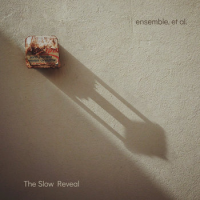 While Yarn/Wire moves within the territory of new composition, ensemble, et. al is closer to the jazz-influenced post-rock pioneered by the likes of Tortoise. This is no coincidence since their album, The Slow Reveal, was recorded by John McEntire of Tortoise.

The thing that sets ensemble, et. al apart from other post-rock bands, including another McEntire-produced project like Salvatore, is that the band consequently uses percussion to weave their ethereal grooves, with the chiming sound of vibraphone and glockenspiel playing an important role. Whether it is tiniest details in the texture on a section of "Typewriters," with glockenspiel singing softly, or the fast-paced vibes-riffing on "Minbalism," with wordless vocals, the group knows how to write layered pieces that develop organically. The compositions have an immediate melodic quality, but also enough details to warrant solid immersion and the tasteful use of keyboards compliments a sound that is worth holding on to.

Naturally, this album is a must for admirers of Tortoise, but it should also attract curious listeners who like accessible, experimental music with good grooves. The Slow Reveal and Currents Vol. 0 convincingly explore the endless possibilities that lie in the use of percussion.