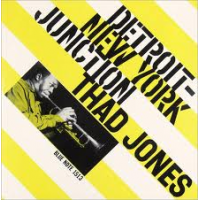 Before he became famous as the leader of a big band, Thad Jones was a trumpet player, and a damn good one.

In 1956, Jones led his first jazz group. It was a small sextet—unlike his later, more celebrated ensemble, co-led by Mel Lewis. This short album, which chronicles that session, has only five songs and runs just 34 minutes. There are no alternate takes.

It's a pleasant album, but not a great one. There is nothing innovative here, or particularly memorable. Jones has a nice tone and decent chops, but he won't make you forget Dizzy Gillespie or Miles Davis, at least not on this CD.

In fact, while listening to the first two songs, you might forget that Jones is the leader of this group. On "Blue Room" (a Rodger-and-Hart tune) and "Tariff" (a Jones original), the leader let's everyone else take the early solos. So we hear guitarist Kenny Burrell, saxman Billy Mitchell and pianist Tommy Flanagan before we ever hear Jones play alone. All the more confounding, Burrell, Mitchell and Flanagan sound more interesting.

The most unusual piece is also the best. "Little Girl," another Rodgers-and-Hart song, is utter simplicity, and very simply arranged: just guitar and trumpet, with bass lurking somewhere deep in the background. It's an unassuming ballad, not especially sentimental or soulful. But it's fascinating in its simplicity. At just under three minutes, it's the shortest cut on the CD. Too bad.

Two more Jones originals—the 10-minute "Scratch" and the 8-minute "Zec"—finish the disc. Both are upbeat, the latter boppish, and Jones properly takes the lead and plays interesting solos. And then it's over, too soon.

Jones recorded two more sessions for Blue Note, both better than this first one. Detroit-New York Junction (named for Jones' hometown and adopted new town), was just a warm-up.