By NENAD GEORGIEVSKI
June 29, 2012
Sign in to view read count 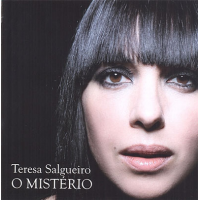 When Portuguese singer Teresa Salgueiro sings, there is hardly anything more beautiful to experience; it's not necessary to speak the language to understand the scope and the power of the emotions she conveys. She has a voice with a naturally sensual glide that is simply arresting. That voice was until recently the trademark of Portugal's best ever group, Madredeus.

Upon leaving the band Salgueiro released several highly acclaimed and highly diverse albums that never saw her stepping in the same water twice. Always looking ahead she produced albums with different concepts that showcased the scope of her tastes and the depth of her soul. But those few albums were basically cover albums. Few artists can render a song with as much unaffected grace and sincerity as Salgueiro; her genius in those records was to take a song and own them. Whether it was the popular Brazilian bossa-nova tracks on Você e Eu( EMI Europe, 2007), taking on the breadth of Portuguese music with Matriz (Farol Música, 2009) or completely new readings of classics by, amongst others, Caetano Veloso and Edit Piaf on La Serena, (Farol Música 2007), Salgueiro's voice transformed the songs and made them her own. It's only natural, then, that the same qualities she invests in other artists' compositions would also inform her own sensibilities as a songwriter.

O Misterio finds her taking on the seat as a songwriter for the first time and presents a more contemporary Teresa Salgueiro. Recorded at the Convent of Arrábida near Lisbon—a beautiful setting placed between majestic mountains and the ocean—it provided the perfect inspiration to write the songs for this record. Musically, it is constructed from the simplest of ingredients: drums, double bass, electric guitar, a sprinkling of accordion and her imposing, but never overpowering, melodious voice. As is the case with all her albums, though, it's Salgueiro's incomparable voice that makes her music so compelling. The singer and her band deliver a powerful and revelatory yet compact experience.

The album's heart is undoubtedly still in Portuguese music but there are other global strands and influences detectable within Salgueiro's sound. The album is ushered in by the warm and mysterious "A Batalha (The Battle)," which introduces Salgueiro's gently rippling vocals against a backdrop of percussion, accordion drones and sinuous guitar. A warm summer breeze infiltrates and snakes around much of the title track, the guitar, the piccolo bass and melodicism closely evoking the work she did with Madredeus in years past. "Cantico (The Chant)" possesses a lilting positivity, while "A Fortaleza (The Fortress)" is a mixture of bustling accordion, percussion and piccolo bass that suggests vibrancy and urgency.

"A Estrada (The Road)" is more like soundtrack music with its captivating theme. It is a seemingly sentimental work that shows off Salgueiro's ability to express the emotions of a song perfectly and purely. "O Incio" is the only instrumental here and it also has strong cinematic features as is it could have been inspired by film composer Ennio Morricone. Here, Salgueiro plays delicate and beautiful piano accentuated by guitar melodies that playfully intertwine. "A Mascara (The Mask)" is a beautiful, semi-precious stone that suggests deep tranquility and beauty, with Salgueiro's voice serving more like an additional instrument, layering sounds on top of the music. "Lisboa" is a precious slice of tango music and a beautiful tribute to her city, Lisabon, which further underscores the album's sophisticated allure.

Each song is a beautifully crafted little masterpiece. O Misterio is a bit difficult to categorize but is all the more unique and enjoyable for it. It really shows an artist at a peak of her craft and with a vision to match.

A Batalha; O Misterio; Cântico; Ausência; A Fortaleza; A Estrada; Ando Entre Portas; O Início; A Máscara; A Fogueira; Lisboa; Senhora Do Tempo; A Paixão; A Espera; A Partida.