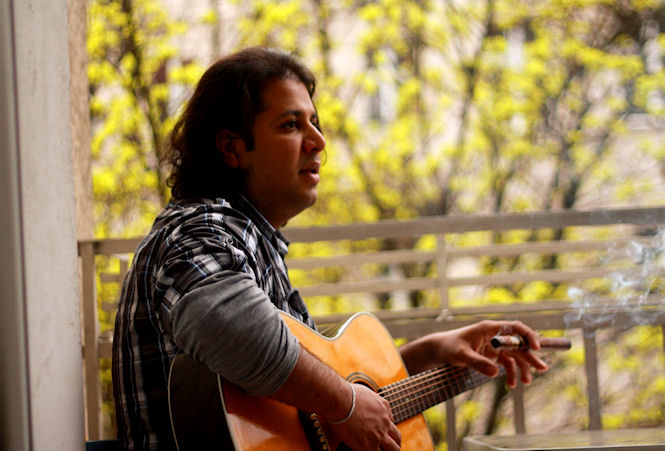 By SAVIO REGO
August 7, 2011
Sign in to view read count
Meet Savio Rego:
It has been said by those that know his music that the sound of Savio Rego's guitar is soft and lush, creating layers of silky smoothness while his voice expresses intimacy and calm reflection immediately evoking passionate and romantic feelings. Having captured the minds and hearts of many followers with his debut CD which was released in October 2009, it is time for him to make the breakthrough into the big time with his new album—Someone To Tell. This record is very emotionally charged. Whether the songs are dealing with longing ("Still in Love With You") or lust ("Crush"), you'll be reduced to mush. It contains all the best elements of blues, jazz, Latin, R&B and soul. Yet its poignant lyrics and catchy melodies will also satisfy the discerning end of the pop market. So open your ears and your hearts to the beauty of Savio's music. An exciting artist with a unique sound all his own.

Teachers and/or influences?
My Influences have been styles of music rather than specific artists. Genres such as jazz, Latin, blues, rock, trance, R&B, soul and lounge have influenced me the most over the years. But I will attribute a few names that are directly responsible by influencing me with their music: Sting, Sade, Maxwell, AR Rahman, Phil Collins, John Mayer and Richard Marx.

Your sound and approach to music:
Balancing sound with silence. I use a less is more kind of approach to writing my music, creating melodies, songs and vocals to be listenable and palatable with listeners.

Your dream band:
Sade or Sting would be a close tie.

Your favorite recording in your discography and why?
The newest generally tends to be my favorite so I'd say my new album Someone To Tell. I just feel like I have evolved as a musician since my debut release in 2008. And you will hear that in the new album. I like that aspect of songwriting, letting the most natural things flow out of you.

The first Jazz album I bought was:
Sade, Diamond Life. It's not necessarily a jazz album as her sound is a concoction of genres but you can certainly hear the jazzy tones in her music.

What do you think is the most important thing you are contributing musically?
To have my listeners be able to relate to my music. My music is about the cycle of love and situations that most of us have experienced in life. I feel my job as a songwriter is to bring that thought, that situation, the emotions in the form of a song.

Did you know...
The ability to learn things by ear. It's something the higher powers have blessed me with. I'm able to learn, evolve and produce primarily due to this attribute.

CDs you are listening to now:
I listen to specific songs as opposed to albums so I listen the artist: Sade; John Mayer; Maxwell; Phil Collins; Jason Mraz.

What are some of the essential requirements to keep jazz alive and growing?
I think it's new music and new listeners that appreciate each other.

What is in the near future?
I recently released my second studio album Someone To Tell. Currently, I'm promoting it online and hope to be touring very soon. If you haven't heard it yet, head over to my website and give it a listen.

By Day:
I used to be a banker in the Financial Industry but I quit it for music.

If I weren't a jazz musician, I would be a:
Musician learning jazz music :)