By DAN BILAWSKY
September 8, 2019
Sign in to view read count 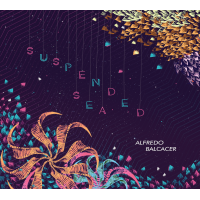 The only constant is change, and it's in that phrase that we can best suss out the meaning(s) embedded within this debut from Dominic guitarist Alfredo Balcacer. Expressing both roots and evolutionary branches, Balcacer hangs his lines on the sounds of his homeland while extending their reaches across the Caribbean to address his growth as an artist and immigrant in the United States. What that process yields is both genuine and generative in its expression(s).

Rhythms fortified by the forms and conditions of the Dominican Republic, fusions fluid in language(s) spread across his travels, and textures rich in nuance inform Balcacer's work from the beginning. "La Silla Marron"—a deftly spun weave featuring the core band plus Dr. Scott Cowan on trumpet, Yakiv Tsvietinskyi on flugelhorn, and Katie Lockwood with wordless vocals—serves as an introduction to Balcacer's music, but it's hardly a summation. "It's Taking Too Long"—an energetically anxious offering with a cool sheen, intense guitar contributions and some hot solo work—shows off another side of the leader's personality, as does the punctuated-turned-swinging-turned-jamming pathways defining "Difusion Azul" and the haunting and transformative theme of "The Mourning Process."

One of the keys to this music's general success, beyond the writing itself, is the sympathetic mesh of musicians giving it life. Bassist Henry Rensch, drummer Madison George and percussionist Otoniel Nicolas have a firm yet fluid grasp on the idiom; keyboardists Rufus Ferguson and Dutcher Snedeker deal with both grain and greater aspects of the work; tenor saxophonist Caleb Elzinga covers the whole cool-to-hot spectrum while addressing blend and balance with his company; and a variety of guests enhance various aspects of the artwork. There are times where prolonged activity on a prescribed path tends to dull the senses a bit, but those issues are rare. By and large, Balcacer's work commands attention. Whether we're talking about a wild ride like "Inside My Head," a more patient pronouncement such as a "Love Treaty," or the Afro-Caribbean-glazed fusion fields of "Con Em Alma," this young guitarist colors the ears impressed.