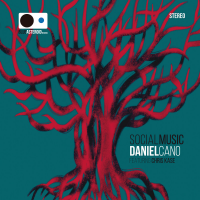 Interviewed by Bryant Gumbel for NBC's the Today Show in 1982, Miles Davis wrily responded "I don't like that word jazz...I think social music...all the social melodies...out in [the] air...it's not jazz anymore...that's the social music I'm talking about. You take what you want out and leave what you don't like. You know, like food." Thus Davis coined the phrase "social music" which consequently inspired the title of Daniel Cano's album. Following the serpentine intro to the title track, bassist Dani Pozo briefly quotes from Miles Davis' In A Silent Way (Columbia, 1969), and Cano appropriately deploys wah-wah trumpet as a respectful nod to his hero.

On both "Trippy" and the quirkily titled "Hon, A Couch Has Fallen From The Sky" there are actually two trumpeters playing. On the first number composed by guest trumpeter Chris Kase, both of the horn players solo. Kase, incidentally, is American by birth but now lives in Madrid, whereas Cano is Spanish and now lives in the United Kingdom. The second track is infused by elaborately rich harmonies evinced by the two trumpeters. Wilfried Wilde's stinging guitar solo interpolates the otherwise sonorous mood and again both horns solo in succession.

The languorous "Pineapple Soul" is a laid-back affair punctuated by an octave pedal infused bass guitar solo plus Cano's ever-searching trumpet and Wilde's overdriven guitar outing. "Fly On The Wall" offers a restrained funkiness, primarily underpinned by the labyrinthine bass guitar lines over which Jorge Castañeda solos on Fender Rhodes and Cano deploys biting, urgent trumpet. "To Whom It May Concern" is a complex, questing piece featuring Cano and Wilde, but in contrast the closer, "Westgate Groove," benefits from a pervasive Nucleus / Soft Machine-type riff that drives the number along. Cano, who is supported here by a group of first class musicians, proves himself a brilliant musician, dually gifted as sensitive, melodious trumpeter and an imaginative and skillful composer.

Trippy; Hon, A Couch Has Fallen From The Sky; Social Music; Pineapple Soul; Fly On The Wall; To Whom It May Concern; Westgate Groove.