By CELESTE SUNDERLAND
June 13, 2004
Sign in to view read count

The thing that is interesting about good improvisation and good composition is there are always options.

Our elders often pass on truths learned along the road of life, old adages that become mantras repeated continually. Roscoe Mitchell’s father gave him one piece of advice that he’ll always remember: “Time is very important. Use your time wisely.” Sure, it’s a universal truth, but for Mitchell, this advice is especially relevant, because the saxophonist, flutist, clarinetist, percussionist, composer has so much to offer, his only hope is to strike up a deal with Father Time. Or just hop out of bed at some ridiculous hour.

“I’ve been known to get up at three. That’s six hours before nine o’ clock!” he explained over the phone from his hotel room in Milan. “I like the mornings because when I first wake up I’m there. I’ve rested and my mind is going good and I can just go right to what it is I want to do. And I do know that for me to accomplish all I would like to accomplish in music, I would need more than one lifetime.”

So far in this lifetime, Mitchell has made astoundingly good use of his time. In 1965 he helped establish the Association For The Advancement of Creative Musicians, a collective of composers and musicians dedicated to exposing their own work and nurturing the development of creative music. This led to the Art Ensemble of Chicago, the extraordinarily prolific and profoundly influential group Mitchell founded in the late ‘60s with Malachi Favors, Joseph Jarman, Lester Bowie and, later, Don Moye. Their brilliant African costume and painted faces made for vastly entertaining performances and their avant-garde combinations of free improvisation, European compositional elements, African music, and jazz formed a compelling new style of sound. 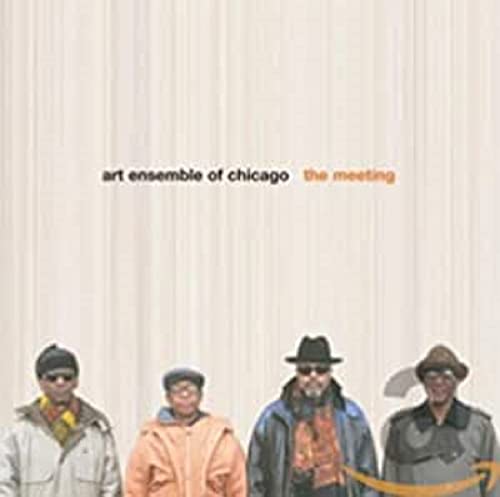 Last year The Art Ensemble released two albums. The Meeting (Pi) incorporates small instruments, winding clock sounds and swatches of percussion, and marks the return of Jarman after a spiritual hiatus. And Tribute To Lester (ECM) honors the group’s trumpet player after his death in 1999. Last January, bassist Malachi Favors passed away. With the absence of two of its pivotal members, The Art Ensemble continues.

Last month the group returned from a 16-date tour with the Art Ensemble that started in London and continued through France and Italy, with a one-night stop back home in Chicago, at Mandel Hall where they recorded their legendary live album 32 years ago ( Live at Mandel Hall , Delmark 1972). This month his composition “Non-Cognitive Aspects Of The City”, based on the words of Jarman will be performed at Merkin Concert Hall. One week later he’ll be in Finland with his quintet. In early September he’ll travel to Munich for a Symposium on Improvised Music where a new work for a 12-piece ensemble will be recorded by ECM.

What propels him is constant learning and a succession of concerts equals constant development. “If I did a certain thing last night, I’m trying not to do that the next night exactly. If I’ve got something going on that seems like it might be working, then I want to explore that to see what options I have to expand it. What I’ve discovered about music is that when you get one area going, it opens up some doors to other things, and so on like that so it’s a constant thing, you can open up one door, and stay in that room for a while, and pretty soon you want to go to another room so you open up another door, and that gives you accessibility to those two rooms, now you have access to three, four, five, seven, eight, nine, ten...”

Inspired by his contemporaries, Mitchell recently caught a concert of his old college buddy Anthony Braxton and was impressed by Braxton’s new ability to sing while he plays. “It’s always great to go to his concerts because he’s always working on something. To watch Anthony play that solo concert and to see the amount of control he has in being able to bring that in and out of some particular thing that he’s playing. It’s very effective.”

A technique Mitchell uses in his own personal development is to revisit things from the past. Recently he gave Jackson In You’re House /Message To Our Folks a spin. Varese Records reissued the combination of the Art Ensemble’s earliest two studio recordings in 2001. He thought about how the ideas he had then could be made better with the knowledge he has now. “When you learn something it gives you accessibility to something else. You’ve got lines that you can go on and on and on and on for. I want to play music that is constantly engaging and exciting.” He explained how he wasn’t able to play long lines until he learned circular breathing. And he wasn’t able to truly improvise until he learned the elements of composition. “Improvisation is spontaneous composition,” he said. “You have to know how composition works because if you don’t, you won’t know that if someone was playing eighth notes that you could play triplets and have counterpoint. The thing that is interesting about good improvisation and good composition is there are always options. If you’re improvising with someone and there are no options something’s wrong with the improvisation.”

In addition to knowledge, atmospheric balance also plays a large part in Mitchell’s playing. “You don’t want to go up there because you had a good night last night and try to recapture it,” he explained. “Every day is different, and this is the thing that’s exciting about improvisation. If I go to a festival and hear some people playing, and I can tell the evening is low key, what do I do at that point? I can go up there and try to make things different than what they are, and that might not work out, but if I go with the flow of the low key evening, I usually fair much better.”

On this past tour Mitchell met with enthusiastic audiences, and his optimism for the future of music is high. “I would say that this is the best time for music,” he said. “Most people when they come up to me they don’t say they’ve enjoyed the music or something like that, they say ‘they need it.’ They need the music. I think it’s very important to be involved in a music that reflects your own life and your own time, and if I go back and look at people I really love, this is what they were doing. What I’m seeing now is a lot of people really want to come back to that and the music itself has gained such a broader audience, a lot of young people, they’ve been looking for a music that relates to their lives. That’s what I find really exiting about this period.”

He said that the truly successful musicians incorporate their personalities into their music, and make progressions beyond what others have done before them. He counts Braxton, Henry Threadgill, Muhal Richard Abrams, Leroy Jenkins and Wadada Leo Smith in this group. “You have to keep working on what you’re doing, you can not be influenced by what’s going on because what I found is that music will weed out whatever is weak.”