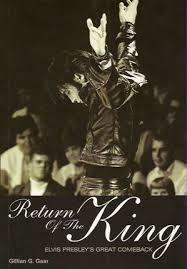 Elvis Presley continues to be one of the most recession- proof commodities since his death in 1977. The three years since 2007 have seen books written by Presley associates George Nichopoulis (The King and Dr. Nick: What Really Happened to Elvis and Me (Thomas Nelson, 2010)), Sonny West (Elvis: Still Taking Care of Business (Triumph Books, 2008)) and Jerry Shilling (Me and a Guy Named Elvis: My Lifelong Friendship with Elvis Presley (Gotham, 2007). The previous 30 years have yielded scores of memoirs, biographies, fictions, fallacies, well- intentioned remembrances, and colicky dyspeptic tell-alls.

Precious little scholarship has been published regarding Presley and his truly authentic American story. Whether or not Gillian Gaar's Return of the King: Elvis Presley's Great Comeback is scholarship, it is well researched, narrowly focused and freshly empathetic. Gaar— whose most recent publications include the fine 33 and 1/3 series offering Nirvana: In Utero (Continuum, 2006) and She's A Rebel: The History of Women in Rock and Roll (Seal Press, 2002)— takes on the most urgent and creative period in Presley's life, the years between the 1967, when he was leaving movies, and 1970, when he was taking up residence at the International in Las Vegas.

In between was Presley's famous 1968 Come Back Special which first aired on December 3rd, on NBC. Presley emerged in black leather to a new world public. Also were the equally famous American Studio Recordings that resulted in the albums From Elvis In Memphis (RCA, 1969), which rendered the hit "In the Ghetto," Back in Memphis (RCA, 1970), as well as the singles, "Suspicious Minds" (his last number one single in the U.S.), "Daddy Don't Cry" and "Kentucky Rain." Gaar captures this period with a fresh and welcome clarity that honor's Presley's achievement with these recordings against the backdrop of his previous wasted nine years in Hollywood.

ADVERTISEMENT
America's Puritan roots make the redemption story a potent motif. A subset of that motif is the "comeback." By 1968, Elvis Presley had lost most of the artistic credibility he secured with his Sun and early RCA recordings through lame management by both the Svengali Tom Parker and feckless Felton Jarvis. If rock and roll as a musical genre was birthed July 5, 1954 with Elvis Presley's Sun recording of Arthur Cruddup's "That's Alright" (for the sake of this argument), then that genre he helped create left Presley behind, reaching a triple point of popularity, profitability and promise.

And this is why Gaar's book is so important. It raises Presley out of the mire of the years that followed to his sordid and mysterious death, placing him squarely in the proper perspective as a singular American talent after whom music was never the same.