By MARK SULLIVAN
September 3, 2019
Sign in to view read count 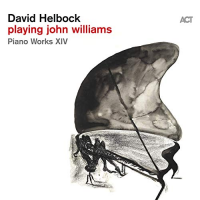 This is music that is nearly inescapable in contemporary culture, associated with blockbuster films like Harry Potter, E.T., Schindler's List, Superman, Jurassic Park, Jaws, Star Wars, and Raiders of the Lost Ark. Helbock does not shy away from the most iconic themes, interpreting them in a variety of creative ways—but regardless of the arrangement, he never fails to deliver a clear statement of the theme at some point. Movie fans love these themes, and so does he.

The set opens with "Hedwig's Theme" from the Harry Potter series, which intrigued Helbock so much that he includes four versions of it. The first version is a delicate Koto-like arrangement with preparations inside of the piano (a Helbock trademark). The second is a graceful, sparsely voiced ballad. The third brings the melody down into the midrange, accompanied by rolling chords. The fourth (and longest) is a romantic, fully voiced treatment with improvisational filigree, including a bit of stride piano. A fascinating progression, as well as a demonstration of Helbock's sytlistic range as an interpreter.

Other themes emerge from an improvised introduction. "Theme from E.T." opens with a jagged bass line: then after inserting the theme into the texture, Helbock goes off on several improvised tangents, before a final big thematic statement. "Theme from Schindler's List" opens with harmonics inside the piano, but finds its way to a lyrical, more conventionally pianistic exploration. "Superman March" is especially good at confounding expectations. Improvisations over a busy bass line only gradually give way to the familiar theme. Perhaps because it is less familiar, "Escapades, I. Closing In" from the Catch Me If You Can soundtrack gets an especially varied treatment, with inside the piano textures interspersed with keyboard phrases.

"Theme from Jaws" inspires an appropriately spooky sound world, opening with rumbling textures. The album concludes with a fantasia on the "Star Wars" theme (certainly one of Williams' best known compositions), followed by one lesser known: the beautiful "A Prayer for Peace" from the film Munich. A reflective ending to an extremely varied album. Helbock's interpretive powers are on full display here, in a program that may not appear to be a good match for solo jazz piano treatment at first glance.