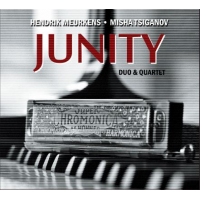 Junity? No, that's not a misprint. Take “junto," the Brazilian word for together, and marry it with “unity"; that's how you get “junity," a hybridized term that accurately describes the relationship between harmonica master Hendrik Meurkens and pianist Misha Tsiganov. These two men have been playing together for nearly a decade, appearing together on stages across the world and pleasing Meurkens albums like Samba To Go! (Zoho Music, 2009) and Celebrando (Zoho Music, 2012). Junity, a program ...