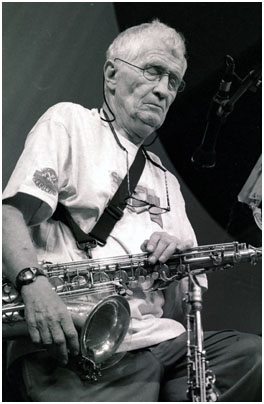 slideshow
Bill Perkins (1924-2003) was the archetype of the creative musician incapable of letting his style freeze in place. To borrow the phrase coined by his initial inspiration Lester Young, Perkins refused to be a “repeater pencil." He was with Stan Getz, Gene Ammons, Zoot Sims, Richie Kamuca, Al Cohn, Don Lanphere andmany others in a generation of young tenor saxophonists who developed with Young as their model. His playing under Young's influence graced the bands of Jerry Wald, Woody Herman and Stan Kenton and dozens of recordings from the 1950s on. It was epitomized in his solos on Grand Encounter, the leaderless 1956 album he shared with John Lewis, Percy Heath, Jim Hall and Chico Hamilton.

When he left the 1950s, Perkins' restless curiosity and musicianship kept him searching, studying and changing. I know from many conversations with him that he appreciated the enthusiasm of listeners who loved his early work, but he would not deny the compulsion to progress. His solos on Bill Holman's 1997 big band album of Thelonious Monk tunes are latterday evidence of that. There is more in this video clip of Perkins from a 1993 appearance with Shorty Rogers. (Rogers doesn't play on “You've Changed.") The rhythm section is Chuck Marohnic, piano; Joel DiBartolo, bass; and Dom Moio, drums. For reasons known only to whoever posted this on YouTube, the clip fades to black just as Perk is starting the final 16 bars of his last chorus. In addition, the video is fuzzy and applause wipes out the beginning of Marohnic's solo. But for Perkins' reading of the melody and his solo chorus that follows, this glimpse of his playing in his final decade is worth seeing and hearing.

For more video clips from the session, go here.