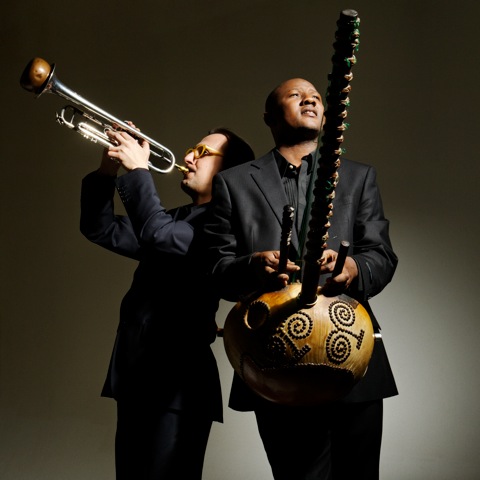 Duo, Performing Music from Sira, Will Also Appear at the Dalai Lama's Festival of Sacred Music in Los Angeles

Sira, the first recorded collaboration from German-born and NY-based trumpeter Volker Goetze and Senegalese kora player and singer/griot Ablaye Cissoko, earned the exceptional duo a spate of critical acclaim and soared to the #2 position on the CMJ World Music chart. In the three years since Sira's 2008 release, Gotze and Cissoko have continued to mine the rich possibilities offered by their distinctive blend of jazz and world music.

With a new CD set to be released in 2012, Goetze and Cissoko will embark on a series of performances that will take them from the east to the west coast, and then to German and France before the end of this year.

The tour will begin on October 1 in New Paltz, NY at the Unison Arts Center, will continue on to Boston for a show at the Beehive on October 2.

On October 13, Goetze and Cissoko will appear at Culturehub in NYC, in the debut performance of their Mande Symphony, a multi-media event that will feature the duo along with a string quartet, the much lauded Richie Barshay (Chick Corea, Esperanza Spaulding) on drums, and computer-modulated audio and video created by visualist Joshue Ott. The Mande Symphony tells the legendary story of a Mande griot, Kimmintang CIssoko, from the time he prayed that he could help alleviate the suffering of his people through his encounters with African spirits and genies that ultimately led him to create the African kora. Mandinka, the language of the Mande people, is a tonal language, making it ideal for musical adaption. The tonal sound provides a base for notated, rhythmic sound that provokes improvisational passages from the orchestra.

During the performance, sampled speech and music will be sent to a computer, where Joshue Ott will modulate their effect on stunning visuals from South Africa, in real time. Ott creates a carefully crafted dialectic between the aural and visual experience; his artistic intention is to evoke some sense of the powerful African spirit underlying the Kimmitang story in a way that makes it accessible and powerful to a Western audience.

Mande Symphony is made possible in part with public funds from the NY State Council on the Arts, the New York Foundation for the Arts, The Manhattan Community Arts Fund, supported by the New York City Department of Cultural Affairs in partnership with the City Council and administered by Lower Manhattan Cultural Council.

Goetze's New York Council on the Arts grant also made it possible for him to complete his debut film, Griot, which will be pre-screened in the Film Market at Womex, on October 27 in Copenhagen.

Following their performance of the Mande Symphony, Goetze and Cissoko will travel to Los Angeles to appear at the Dalai Lama's Festival of Sacred Music, where they'll perform music from Sira. Their short US tour will conclude with two more west coast dates—October 15 at Café Culture in Chico, CA and October 16 at the Ashkenaz Music and Dance Community Center, in Berkeley, CA.

From November 2 through November 6, the two will perform in Germany and France.