SOURCE: IMPROVISED COMMUNICATIONS
May 6, 2008
Sign in to view read count 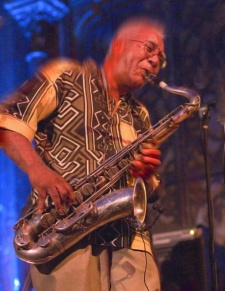 slideshow
On Wednesday, June 11th, Vision Festival XIII will present an entire night of music dedicated to this year's special honoree, New Orleans saxophonist and educator Edward “Kidd" Jordan. Five groups, four featuring Jordan himself, will pay tribute to a musical legacy that spans more than a half century. Advance tickets are available online or by phone at 1- 800-838-3006.

Jordan will be joined on stage by collaborators from throughout his career, including Fred Anderson, Billy Bang, Hamiet Bluiett, Dave Burrell, Hamid Drake, Alvin Fielder, Joel Futterman, Clyde Kerr and William Parker. Two of his five musician children, sons Kent and Marlon, will be part of a group called New Orleans Pay Tribute to Kidd Jordan, featuring such former students as Donald Harrison, Jr., celebrating his importance to the city's jazz heritage.

The evening will also feature spoken word by poet, author, teacher and NOMMO Literary Society founder, Kalamu Ya Salaam, and images from photographer Michael Wilderman, documenting Jordan's work over the past 10 years. The night will begin with a panel discussion on the role of art in the healing of New Orleans. Jordan is one of many New Orleans residents still unable to move back into their homes three years after Hurricane Katrina.

“To know and work with Kidd Jordan is an honor," explains Vision Festival founder and organizer, Patricia Nicholson-Parker. “He is not only one of the very best musicians I know, he is also one of the finest human beings I know. His dedication to children and community, and his simple kindness, is an inspiration to all of us. He has withstood the personal struggle and lack of acknowledgment that is too often a part of being a great avantjazz artist. It is our privilege to acknowledge his great genius and numerous accomplishments."

This night-long tribute to Jordan on June 11th will take place on the second of six days of events at this year's Vision Festival, which runs from Tuesday, June 10th through Sunday, June 15th at Manhattan's Clemente Solo Velez Cultural Center. The Vision Festival is a presentation of Arts for Art, Inc., a non-profit organization dedicated to building awareness and understanding of avantjazz and related expressive movements while encouraging a sense of community amongst artists and their audiences. An annual event since 1996, the festival has grown to become New York's premier artist-run, multi-disciplinary celebration of creative improvised music and the culture that surrounds it, drawing both concertgoers and performers from all around the world.

5:30 p.m. [Free Admission]
Panel: The Role of Art in the Healing of New Orleans

7:30 p.m.
Projection of photos of Kidd Jordan by Michael Wilderman

10:00 p.m.
Projection of photos of Kidd Jordan by Michael Wilderman