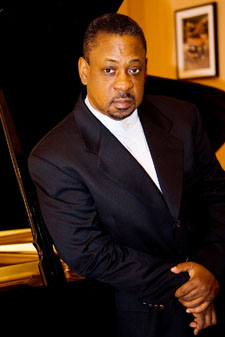 slideshow
New York-based pianist, composer, and bandleader Onaje Allan Gumbs will appear in a variety of solo and ensembles settings in Fall 2008. Please see below for a full schedule of events.

Latin Side of Charlie Parker (a birthday tribute to Bird)

Onaje's first solo album, entitled Onaje, was recorded in 1976 and was followed by That Special Part of Me, Dare To Dream, Return To Form, Remember Their Innocence, and his current release Sack Full of Dreams. Woody Shaw's album, Rosewood, for which Onaje contributed as pianist , arranger and composer, won the Down Beat Reader's Poll for Jazz Group and for best jazz album in 1977, later nominated for a Grammy in 1978. In 1985, as the arranger and keyboardist for Stanley Jordan's version of “The Lady in My Life", it helped Stanley maintain the #1 spot on Billboard Magazine's jazz charts for more than 47 weeks.

In 2006, Remember Their Innocence earned Onaje an NAACP Image Award nomination in the Outstanding Jazz category.