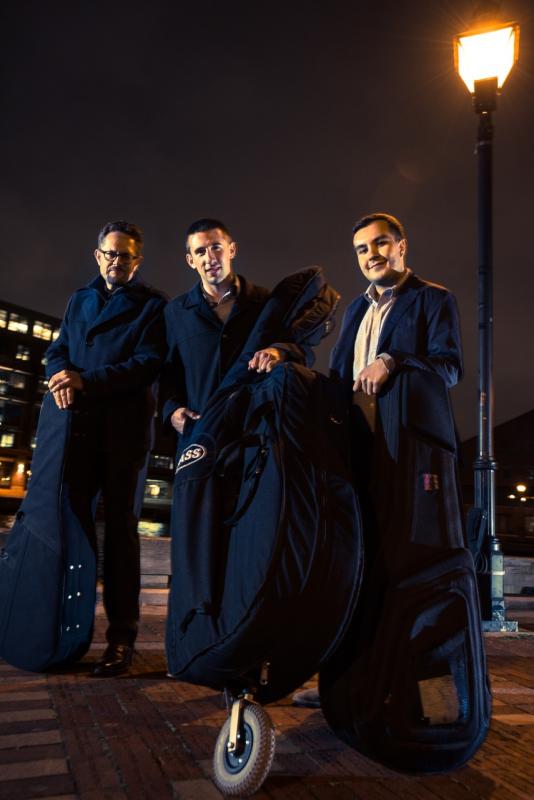 slideshow
Popular Charm City guitarist and bandleader Michael Joseph Harris is taking his role as a musical ambassador to a new level with the 2016 release of two gypsy jazz albums and extensive touring across the United States. The latest is the “Django by the Sea Tour” with a send-off performance at the Baltimore Jazz Fest October 1, followed by fourteen concert dates through October in the U.S. and Canada, including the Django by the Sea festival October 8, 2016.

His groups Ultrafaux and Hot Club of Baltimore are comprised of the same core members: Harris and Sami Arefin trade positions on lead and rhythm guitar. Eddie Hrybyk (pronounced RYEbik) plays bass. Both bands are fronting their second albums. Contemporary gypsy jazz trio Ultrafaux released all new music with their second album, Deuxième, and they now boast a total of 24 original songs with another CD on the way. The more traditional group Hot Club released Coquette. The Django by the Sea Tour showcases Ultrafaux and Harris’s inventive, quirky and mirthful compositions, which are attracting a new generation of gypsy jazz fans.

Harris and Ultrafaux have contributed to the huge growth in popularity of gypsy jazz in the U.S. The founder of the Charm City Django Jazz Fest and a popular jam session leader, Harris immerses himself in the tradition. Says Tom Cole of NPR and Pacifica Radio’s WPFW, “These folks can handle the complexities and breakneck speeds of manouche swing. In 2016, we can come close to the experience of what it must have been like to hear Django Reinhardt play...in 1937.” WTMD’s Sam Sessa praises Harris’s modern compositions: “Ultrafaux breathes new life into jazz,” he says, “while holding onto the sense of nostalgia that makes this genre so timeless and appealing in the first place.”

There is a burgeoning interest in the gypsy jazz genre, which originated with legendary Belgian-born French guitarist Django Reinhardt, who perfected a Parisian Roma swing style in the 1930s and 40s. The new wave of interest is giving rise to gypsy jazz bands and festivals dedicated to Roma swing in its many forms. Harris himself is co-founder and music director of the annual Charm City Django Jazz Fest. Highly collaborative, he plays with many guest artists at home and on tours like this one.

The music of Deuxieme by Ultrafaux (and Coquette from Hot Club of Baltimore) is available from bandcamp.com. Look for even more information and tour dates at Jazz Near You

DJANGO BY THE SEA TOUR DATES

Announcing the Ultrafaux “Django By The Sea" Tour