The Stephen Anderson Trio "Forget Not" on Summit Records 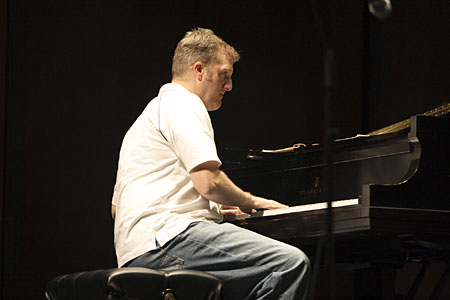 slideshow
As a new artist for Summit Records, The Stephen Anderson “Forget Not" compact disc (released May 2008) has begun to draw international attention and is being aired on jazz radio stations throughout the world.

This trio is unique as Anderson's diverse compositional palette has earned him awards and three degrees in classical composition (including the DMA, a Barlow Foundation award, and a United Arts Council of Greater Greensboro award) and his works have been performed by various reputable ensembles across the United States, while at the same time, as an alumni and pianist with the famed North Texas One O'clock Lab Band and subsequently the Lynn Seaton Trio ("Puttin' On the Ritz" [2005] and “Ballads 2006"--both Nagel Heyer Records), Anderson has honed in on the groove as the most important factor in his music. The album is progressive, yet aesthetically pleasing and merges the cultural tradition of jazz with a wide palette of harmonies and textures from Anderson's eclectic background in music.

The album received 4 and 1/2 stars from All Music Guide's reviewer Scott Yanow, stating “Stephen Anderson...creates new music and improvisations that are full of life, energy and fresh ideas. Highly recommended."