The Curtis Brothers - Completion of Proof (2011) 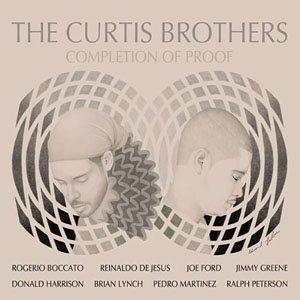 slideshow
The virile, confrontational jazz of the 1960s is reborn on the Curtis Brothers' Completeion of Proof. Siblings Luques and Zaccai Curtis perform in the brash, muscular style of Art Blakey's Jazz Messengers, even as they confront thorny moral issues with the same veracity as John Coltrane.

Luques (bass) and Zaccai (piano) cement the Blakey connection by inviting former Messengers Brian Lynch on trumpet and Donald Harrison on alto. More specifically, the rhythm-focused recording seem to have as a primary focus drummer Ralph Peterson Jr. Percussionists Rogerio Boccato, Pedro Martinez and Reinaldo de Jesus add a distinctly Pan African atmosphere to the proceedings. Saxophonists Joe Ford and Jimmy Greene are as brash and as soulful as any to take the stage with Blakey, too.

But the most interesting element of their work isn't so much that reminiscent, and very welcome, hard-bop sound, as it is their central subject matter: Justice—social, racial and otherwise. “Protestor," the opening track on Completion of Proof, is fiery tribute to the solitary man who stood against a column of armed tanks at China's Tiananmen Square in 1989. The centerpiece “Manifest Destiny Suite" is a series of indictments against our more troubling impulses&#151from the craven hunger of pusherman capitalism to the blithe genocide of so-called manifest destiny. “Jazz Conspiracy," in a moment tailor made for this era of occupying local protestors, questions the role of corporations in government.

Completion of Proof is not all dark ("Sol Within," for instance, celebrates the warm humanity inside of all of us) but it's as serious, as contemplative, and as angry as these times sometimes require. The Curtis Brother may sound like old-school throwbacks, at times, but their speaking a modern language—one ripped right out of the headlines.

Recording The Curtis Brothers Something Else! AAJ Staff