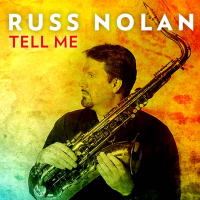 In the ten years since his move to New York City from Chicago, tenor saxophonist/composer/arranger Russ Nolan has made great strides in advancing his musical career. He immersed himself in the scene, playing and collaborating with a wide range of musicians. He made his first recordings as a leader — the quartet date Two Colors (2004) and the much-praised With You in Mind (2008), on which he was backed by the Kenny Werner Trio. And, less typically, he hit the dance floor, becoming an active and accomplished salsa dancer.

It was Nolan’s experiences as a dancer over the last five years that led to the conception and execution of his forthcoming CD Tell Me, which his Rhinoceruss Music label will release on September 28. “On the dance floor, you key off of a rhythm,” he says. “Getting it into my body helped my sense of time. I became a lot freer with rhythm.”

Latin rhythms assert themselves in unexpected places and in unexpected ways on the new album, produced by and featuring violin sensation Zach Brock. “Russ and I began our musical relationship over ten years ago in Chicago,” says Brock. “I feel privileged to have worked on both the production and performance aspects of this recording. The band is top-notch, the music is both challenging and accessible, and the bandleader is a truly inspiring soloist, writer, and arranger.”

Nolan is a powerful tenor player who strikes a soulful balance between a classic, hard-edged sound and the airier tones and textures popularized by Michael Brecker. As an arranger he applies his distinctive touch to an array of material including Joe Zawinul’s “A Remark You Made,” John Lennon’s “Nowhere Man,” and, most strikingly, Oliver Nelson’s “Stolen Moments.” “The singer I wrote it for didn’t like 6/8, so I kept it for myself,” Nolan says of the dynamic chart.

For the new disc, Nolan put together a strong quartet comprised of Art Hirahara, the San Francisco native whose second album, Noble Path, was released last year on Posi-Tone; bassist Michael O’Brien, who plays with Brazilian guitarist Sandro Albert; and drummer Brian Fishler. (Producer/violinist Zach Brock appears on three tracks.) “We’re a band,” Nolan says. “We’ve spent a lot of time together. These guys may not be well known yet, but they can really play.”

Russ Nolan, 44, was born and raised in Gurnee, Illinois (halfway between Chicago and Milwaukee), where he was a star basketball and baseball player and also played in the school marching and jazz bands. After a few semesters at Northern Illinois University, Nolan ended up in the vaunted jazz program at North Texas State (now known as the University of North Texas). He became friends there with fellow saxophonist Jeff Coffin, with whom he played in a three-tenor band also featuring Larry Panella.

Back in Chicago, however, he played very little music from 1994 until the end of the decade. Then he was contracted to play in the orchestra that backed singer Kurt Elling at Mayor Richard M. Daley’s big millennium bash. That was where he first met Brock, with whom he subsequently played in a quintet of musicians associated with the Bloom School of Jazz.

Yet the Windy City was never the right fit for Nolan. The more he studied and played with visiting New Yorkers including Chris Potter, Kenny Werner, and Dave Liebman — and the more they encouraged him to move to the Big Apple — the more he knew he had to go East if he was going to make anything of his career. He made the move six months after 9/11, settling in Sunnyside, Queens. It wasn’t easy getting gigs, but being in the jazz capital of the world rejuvenated him. (He also met his wife, Luz, while pursuing his salsa dance muse.)

“Playing here is everything I could have hoped for,” he says. “There’s such a strong sense of community that phrases like ‘Hey, let’s try this’ and ‘I think this would work better here’ help create the dynamic and progressive music this city is known for.”