Home » Jazz News » Susie Arioli Shines On Her Latest Album, "All The Way"

Susie Arioli Shines On Her Latest Album, "All The Way" 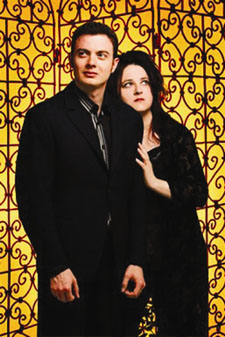 slideshow
Another step in her rich and inspired career finds Susie Arioli pushing the limits of her art with a new album appropriately titled All the Way. The sparkling singer invites us to follow her on a sublime adventure as she brings her finely modulated voice to bear on thirteen numbers drawn from the immortal repertoire of the Great American Songbook. Displaying the maturity of performers who are in it for the long haul, Arioli brings her singular touch to legendary themes that she tackles with heartwarming delight. This seventh studio recording reveals a vocal range that reaches further than ever, and yet is very much in keeping with the unique sensibility that has been captivating an ever-growing public for many years now.

In the wake of the success of her critically acclaimed and gold-certified yuletide album Christmas Dreaming, All the Way will be released internationally, first in Canada on March 27 on the Spectra Musique label, and this summer on Jazzheads Records in the U.S. (# JH1192, jazzheads.com) and on Harmonia Mundi/Jazz Village in Europe, Asia and Oceania.

The spiritual heritage of Chet Baker, Sarah Vaughan and other masters of the genre occupies an essential place in this project, one in which Susie Arioli evokes sources of inspiration that she holds dear. Transcending these influences, she imbues standards like “My Funny Valentine”, “There’s a Lull in My Life” and “Time on My Hands” with her distinctive energy. Still backed by Jordan Officer, with whom she shares arranging and production duties, the singer puts her snare drum aside for the time being and leaves her musicians to build a remarkable setting for performances that are as moving as they are perfectly conveyed. Standing tall on orchestrations of a richness hitherto unmatched in her career, Susie Arioli makes sure as she always does, to leave the limelight to the songs themselves, illuminating them in their purest essence. Thus, the memory of Sinatra is deftly celebrated with the title piece, “All the Way”, halfway between fifties ballad and jazz song, and in the emblematic “Here’s to the Losers” where the horns provide backup to formidable effect. Meanwhile, the lesser-known French version of “What a Difference a Day Makes”—“Un jour de différence”—leads us on a happy rediscovery of this classic from the late 1950s. With an album that gives off a rare quality of emotion, Susie Arioli invites faithful listeners to fall under her spell yet again, continuing a special relationship with them that has led to sales of over 250,000 albums to this point.

A number of talented collaborators were involved in lending All the Way its sense of unity and above all its exceptional musicality. Jordan Officer, to begin with, whose fluid and inventive guitar permeates everything with a continually renewed relevance, solidly supported by a rhythm section composed of bassist Bill Gossage alternating with drummers Tony Albino and Michel Berthiaume. Pianist Jeff Johnston, saxophonist Cameron Wallis, vibraphonist François Stevenson, trumpeter Jérôme Dupuis-Cloutier and bassist Frédéric Grenier also take their places in a geometrically variable lineup, everything rounded out on occasion by a horn section (Al McLean, Averil Parker, Ben Henriques) adroitly led and orchestrated by Wallis.