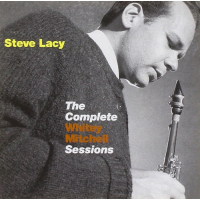 slideshow
Mention the soprano saxophone, and most people think first of Sidney Bechet, Lucky Thompson, Pony Poindexter, John Coltrane and Dave Liebman. But in the 1950s and beyond, the artist who did more to demonstrate the instrument's versatility across multiple jazz styles was Steve Lacy. He began in the early 1950s as a New Orleans-style player, using the instrument as a clarinet. Then he shifted to progressive jazz in the mid-1950s before becoming an early pioneer of avant-garde jazz with Cecil Taylor starting in late 1956. Lacy also was smitten with Thelonious Monk and was among the first to feature an album of Monk's music and recorded Monk's songs on many of his albums.

Lacy's first two albums in 1954 were with trumpeter Dick Sutton. The first was Jazz Idiom and the second was Progressive Dixieland. His next series of albums were with bassist Whitey Mitchell and Tom Stewart, who played the tenor horn—a smaller version of the baritone or euphonium that sounded like a valve trombone.

On Some of These Days, These Are the Things I Love and Spain, Will Bradley, Jr. (d) replaced Al Levitt. And on Fidgety Feet, Out of Nowhere, Potatoes, Rosetta, Gee Baby Ain't I Good to You? and My Heart is a Halo featured Stewart (tenor-hrn) Lacy (sop) Dave McKenna (p) Mitchell (b) and Levitt (d).

The piercing reedy sound of Lacy's soprano sax against the mellow sound of Stewart's tenor horn is particularly textured and engaging, especially on Potatoes and Let's Get Lost. The album, led by trigger-happy bassist Whitey Mitchell, gives everyone opportunities to solo. Most interesting are the arrangements by Hefti. They're taut and swinging.

Give Me the Simple Life by Puma's group has a hip energy, with Puma leading the way and comping with beautiful chords behind the soloists. On this one, Herbie Mann plays tenor sax neatly.

Lacy was a fascinating player who stretched his intellectual side throughout his life, foregoing songbook standards for brave new works and cutting-edge players. Throughout his career, Lacy had an eye for the visual arts and poetry. Both became important sources of influence. During his lengthy career, Lacy collaborated with painters and dancers in multimedia projects.