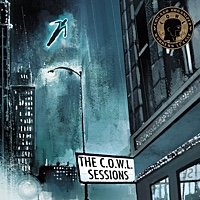 “American history gets overhauled in C.O.W.L., a new series about the superhero labor union of 1960s Chicago that’s been described as Mad Men meets Avengers.” – The Hollywood Reporter

Culver City, CA: Sparks & Shadows announces the release of The C.O.W.L. Sessions soundtrack digitally on October 28, 2014. The C.O.W.L. Sessions is the audio companion to the first five issues of the hit comic book series C.O.W.L., created by Kyle Higgins & Alec Siegel, with art by Rod Reis (who also contributes the cover art for the album). The recording features original music by Joe Clark.

The gritty style and era of the comic (1962) lends itself to the bebop jazz of the era. “Before Kyle started the book, he told me the story he had in mind and talked about the musical mood of the project,” said Clark. “Kyle is very musically savvy and had a lot of thoughtful ideas for the sound of the world — even before he wrote the first draft!”

“In many ways, The C.O.W.L. Sessions has been in the works for almost fifteen years, from the day Joe and I met in high school jazz band,” said Higgins. “Of course, we had no idea our collaboration was going to take this form—his album inspired by my crime-noir-superhero-comic— but considering we became friends over our mutual love of jazz, Chicago, film, and comics, I can't think of anything more fitting.”

The C.O.W.L. Sessions is the first release from Sparks & Shadows not composed by the label’s founder, Bear McCreary. “My goal for Sparks & Shadows was to release unique soundtracks I believe in,” said McCreary. “Joe Clark's original score for the comic book C.O.W.L. was the perfect choice for our first release of music other than my own, because he perfectly captured the moody, sexy energy of the retro / noir stories. If the elegant painted pages of the comic were to resonate strongly enough, Clark's music might just burst out of them.”

The idea for The C.O.W.L. Sessions was to capture an album as if someone recorded it about the heroes of C.O.W.L. in 1962 Chicago. “Each of the five leads of C.O.W.L.'s first story arc are represented musically: Grey Raven, Radia, and Blaze have their own themes,” described Clark. “John Pierce's hunt for tragic truth can be heard in the song ‘Investigations’. Arclight's more self-destructive tendencies are highlighted in ‘Sparks’, named after the nightclub he frequents. Of the remaining tracks, ‘The Boss’ evokes the Chicago political machine, especially the late mayor Richard J. Daley. I also wanted to have one track that set the mood of C.O.W.L.'s Chicago, arguably a character in itself. We decided on a re-harmonization of the old jazz standard ‘Chicago (That Toddlin' Town)’ and we were fortunate to have Raya Yarbrough sing on the track.”

Welcome to the “Chicago Organized Workers League”— the world’s first Super-Hero Labor Union! While C.O.W.L. once stood as a beacon of hope against an epidemic of organized crime and an unbeatable “brotherhood” of Super-Villains, the union now faces its fiercest foe yet—a disillusioned public. In targeting the last of the great villains, C.O.W.L. attempts to prove its value to the world and to each other, while staving off villainy from both outside and inside its offices.