Sinatra: Strangers in the Night 2 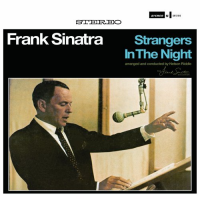 slideshow
Yesterday, I posted about Frank Sinatra's single, Strangers in the Night, which went to No. 1 on Billboard's Hot 100 chart this week in 1966. I also included a link to my Wall Street Journal essay on the song and album. Included in yesterday's post was my complete interview with Jimmy Bowen, who produced the single and shed some light on why Sinatra wasn't crazy about the song and why he avoided it in future concerts.

Today, I want to talk about the album. When the single was released at the end of April '66, it shot up Billboard's easy listening chart before crossing over to the Hot 100. Reprise, which was owned by Sinatra at the time, was heartened by the single's success and decided an album built around the single would experience strong sales. The task of getting the album done fast fell to producer Sonny Burke, who turned to Nelson Riddle for the arrangements. Two sessions were set—on May 11 and May 16.

Over the two days, nine songs were recorded. Arranged by Riddle, the album is Sinatra's best in the 1960s and may well be the last perfect album of his career. Earlier albums in the 1960s tended to be brassy extensions of the 1950s, while later albums were marred by poor song choices and less inventive arrangements. Sadly, someone put the idea in Sinatra's head after the completion of the Strangers in the Night album that Nelson Riddle was old school. As a result, Strangers would mark the last studio album the pair recorded together.

So why is Strangers in the Night Sinatra's finest album of the 1960s and beyond? Because of Riddle and Artie Kane (above, with Henry Mancini), who would become a top TV and film composer and orchestrator. Riddle's swinging arrangements throughout are deceptively fabulous and loaded with sophisticated punch and instrumental texture. As I noted in my WSJ essay:

The “Strangers in the Night” album remains an inventive, sly swinger. It opens with the title song, followed by the breezy “Summer Wind,” a snarling “All or Nothing at All,” a slinky “Call Me,” the punchy “You’re Driving Me Crazy,” a loping “On a Clear Day,” a funky “My Baby Just Cares for Me,” a coy “Downtown,” a finger-snapping “Yes Sir, That’s My Baby,” and “The Most Beautiful Girl in the World” taken at a break-neck tempo.

In other words, the album has a lustrous elegance and a quirky pop sensibility that Sinatra never seemed to duplicate again. It has the feel of an expensive sports car that was perfectly suited to his stage in life. I never cared much for Sinatra's albums that followed as complete artistic packages. I can listen to Strangers all the way through over and over again without skipping a single song. The same really can't be said for his future albums. Each is marred by poor choices. In this regard, Strangers was his Songs for Swingin' Lovers! of the sixties.

When I set out to write about the album, I knew from the start I wanted to interview the organist if he was still around. The album's alter ego rests in the organists hands, in the orchestrated parts and the ad libbed sections. I've always loved how the sporty Hammond's drawbars were set to give the instrument a hard-tack attitude, a finger wag of sorts. Consider My Baby Just Cares for Me or The Most Beautiful Girl in the World. The organ brilliantly mirrors Sinatra's sass.

The problem is that John Ridgway's comprehensive Sinatrafile discography doesn't list anyone on the session. Artie Kane's name did pop up on Sinatra forums, but only in passing, since no one was positive. So, as is my habit, I tracked him down.

“Nelson and I had worked together nine months earlier on a film he was scoring called Red Line 7000, a car-race film. I was a studio pianist, but Nelson wanted me to play a pop-rock organ. When trombonist Tommy Shepherd, who contracted the Strangers in the Night session, called me, he said Nelson wanted me. When I called Nelson, he said, 'Remember the film we did? Red Line 7000? That's the sound I'm looking for.'

“I barely remembered the film. As a studio musician, I worked six days a week back then, so all the sessions sort of blended together. I also rarely played the organ, so remembering that session was a stretch.

“I didn't do any planning in advance of the Strangers album session. Even in motion picture scoring, you rarely know what you'll be playing. It's funny, I almost canceled out of the session, but musicians on the date convinced me to do it so I did. How many times do you get to record with Sinatra?

When I arrived at the studio, I flipped. I wasn’t a jazz organist yet the organ was on a platform in Frank’s line of sight, which meant I’d be featured. It was too late to back out. I just took a Valium, put on dark glasses and went to work. Ultimately the art took over and I was fine.

“During the rundown, I found that many of the organ parts were written out, like on The Summer Wind. But in other places, I was told to fill. I set the drawbars so I'd stand out, which is what Nelson wanted. I have no idea what I did in terms of the slides. I just keep fooling around with them until Nelson liked what he heard. What you hear in those organ settings and notes is my intimidation. But Nelson's arrangements were inspiring, so I quickly settled down.

“When Sinatra arrived, he went into a booth for the run-downs to talk to Nelson about any scoring changes. We were all so impressed. It was Sinatra. But I was nervous. Sinatra had a reputation for getting rid of things and people he didn’t like. Nelson had never featured the organ this way before, and Sinatra didn't know me.

“At the end, I was just happy to leave. To me it was nerve-racking because of who Sinatra was. He was larger than life. Musicians who did recordings on this level were always on the edge of their chairs. Your job was to nail your part as quickly as possible. Of course, eight months later in December, Frank and Nelson wanted me for the TV special, Frank Sinatra: A Man and his Music, Part II. You can see me on stage in a camel sports jacket—and dark glasses."

JazzWax clips: Here's my favorite arrangement on Frank Sinatra's Strangers in the Night album—Yes Sir, That's My Baby. Dig the instrumental sandwiches that Riddle puts together with Artie Kane's organ, whose drawbar settings make the instrument's notes sound like a harpsichord...

Here's the alternate take, which is an alternate take only because Artie's organ wasn't snarky enough and a little ambivalent coming out of the instrumental break...

Here's Sinatra singing The Most Beautiful Girl in the World taken at a tempo Artie Kane said isn't even on the metronome. Dig how fast the musicians had to turn the pages of their music. Nelson Riddle is conducting and Artie is on organ. You can see him in dark glasses at 0:45 and 1:45 in the background on the right. Now that's a studio orchestra!...

Here's Artie playing More on one of his two leadership sessions produced by Henry Mancini with vocal-choir backing...

And finally, here's Artie in 2008 backing Elizabeth Pitcairn on violin...